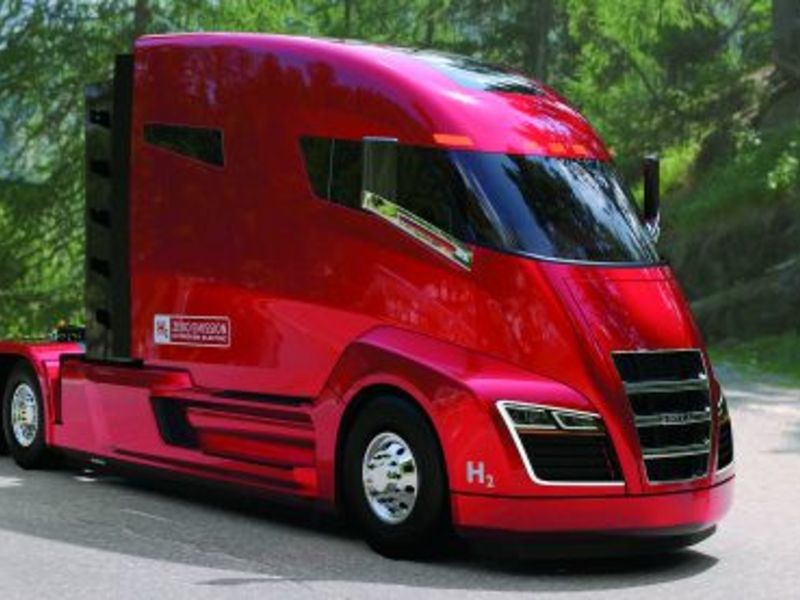 If it seems to you that the trucking industry has been talking about electric trucks for years, that’s because it has.

Electric powertrains have been around since 1888. Being an early technology adopter, the U.S. Postal Service tested electric trucks soon after. However, due to range limitations and charge times, they never were adopted.

In 1966 General Motors Co. introduced its Electrovan, the first vehicle to be powered by a hydrogen fuel cell.

Unfortunately, since the equipment required to power the van filled its entire cargo area and turned it into a two-seater, explosive incidents occurred during testing and the cost of the platinum used in it made it extremely expensive, the Electrovan was mothballed and never sold.

In case you don’t know much about batteries and fuel cells used to power vehicles, the chemical energy in an electric vehicle battery usually comes from metals and their ions that are present in the battery. These batteries are typically lithium-ion batteries, are rechargeable and are designed for a high kilowatt-hour capacity.

A fuel cell used in an electric truck takes hydrogen gas that is stored in a tank and converts it into electricity, which then powers the vehicle. Fuel cells can produce electricity continuously for as long as hydrogen and oxygen in the air are supplied.

Fueling a fuel-cell-powered truck is similar to pumping natural gas. An advantage of fuel cells is that they are lighter than lithium-ion battery packs.

However, hydrogen is expensive to produce, which is why it has not been as successful as batteries. A longtime joke in the industry is that hydrogen fuel cells are the fuel of the future â€” and always will be.

However, there is room in the trucking industry for both technologies, depending on the application.

Late last year, Nikola Corp. announced details of a battery featuring energy density more than double that of lithium-ion battery cells. This new battery technology could double the range of electric passenger cars to up to 600 miles with little or no increase to battery size and weight.

In addition to this good news, the company also said it would not protect this technology with a patent in order to spur the development and acceptance of electric vehicles globally.

A major driver of electric-powered vehicles is government regulations and incentives for the adoption of cleaner and zero-emission vehicles. In Europe there are around 200 cities with access regulations and low-emission zones.

France and the United Kingdom have announced bans on fossil-fuel vehicle sales starting in 2040. These bans have forced truck manufacturers to include electric trucks in their product lines now and initiate the shift to electric trucks from conventional diesel-powered ones.

The incentives for adoption of zero-emission trucks along with low-emission zones are driving fleets to replace diesel trucks with cleaner options in Europe now.

While these incentives are for now on the other side of the “pond,” keep in mind that nearly all truck manufacturers operate globally and low-emission zones are being considered by a few cities in North America.

Here in the U.S. the pressure to reduce vehicle emissions has eased under the Trump administration, however, growing concerns about environmental pollution through internal combustion engine vehicles are expected to play a crucial role in the growth of the electric truck market.

California’s Advanced Clean Truck Rule, which the California Air Resources Board (CARB) is expected to adopt soon, will require up to half of new truck sales in certain classes to emit zero emissions by 2030. The state mandate to begin getting zero-emissions trucks to market begins in 2024 and increases on an annual basis thereafter.

Major truck OEMs and component suppliers either have partnered or invested in battery and motor technology companies and announced they are spending millions of dollars in electric truck research and development to speed up electric truck development, improve energy density, increase battery life and reduce the price of batteries. (Daimler A.G. recently said it would spend $3.2 billion in the next few years, and Volkswagen A.G. has allocated $1.7 billion.)

â€˘ A.B. Volvo has said it would be electrifying its FE and FL truck series;

â€˘ Paccar Inc.’s DAF division has partnered with VDL Group and Cummins Corp. to electrify its CF and LF trucks;

â€˘ Daimler’s Freightliner unit introduced the eM2 medium-duty electric truck and the eCascadia, an electric version of its most popular long-haul truck in North America; and

In January Mack Trucks Inc. introduced an electric LR model that is due to begin refuse-collection and snowplow evaluation trials in New York City.

In addition, BorgWarner Inc. is in the process of acquiring Delphi Technologies for $3.3 billion. Both companies are major players in vehicle electrification technologies and systems. BorgWarner is expecting this move to propel it to be “a leader in electrified propulsion systems that is well-positioned to take advantage of future propulsion migration.”

Electric trucks have motors, not engines, so they don’t need to shift gears and they don’t need oil, air filters, coolant, transmission fluid or emission-control devices, which are the No. 1 maintenance item on trucks. Therefore, maintenance is greatly reduced as is the cost of fuel. It is estimated that the cost to fuel an electric truck will be at least 20% less than the cost of diesel, if not more.

These factors are increasing fleet demand for electric trucks. When Tesla launched its all electric Cybertruck last November, it received nearly 146,000 pre-orders within 36 hours.

The Cybertruck is available in three variations that are equipped with single, dual and triple motors that have a range from 250 miles to more than 500 miles.

Anheuser-Busch Companies L.L.C. placed an order for up to 800 Nikola hydrogen-electric-powered semi-trucks and announced a pilot project with BYD Motors Inc. to operate 21 BYD electric trucks, as well as a 958.5 kilowatt solar array to charge the vehicles at four of its distribution facilities in California.

Amazon.com Inc. has ordered 100,000 custom-built delivery vans for Prime deliveries from Rivian Automotive L.L.C., headquartered in Plymouth, Mich. This is considered the largest order ever of electric delivery vehicles. These units should start delivering packages in 2021, with 10,000 on the road by 2022 and all 100,000 scheduled to be in service in the next 10 years. (Rivian received a $700 million investment by Amazon and an equity investment of $500 million from Ford Motor Co.)

United Parcel Service of America Inc. has ordered 10,000 electric delivery vans from Arrival Ltd., a British electric vehicle OEM, for pickup and delivery routes in both Europe and Asia. UPS will invest $110 million in Arrival and, if everything goes well, has an option to purchase another 10,000 electric vans in the future.

However, one of the major challenges that must be overcome for the deployment of electric trucks is the inadequate charging infrastructure currently in place. Proper planning and installation of charging stations for these vehicles needs to be done, which require huge investments. But an efficient network of charging stations will propel the adoption of these trucks.

Daimler Trucks has launched a global initiative to set up a charging infrastructure for battery-electric commercial trucks, too. The initial push starting in the U.S. will be to establish charging stations at truck terminals and shops for what Daimler calls depot charging.

Daimler’s idea is to build “a network for shared infrastructure solutions” and has partnered with electric-truck fleets, power-grid operators, energy suppliers, charging-hardware manufacturers and charging-software providers.

The goal is to speed up the previously lengthy and complex planning and application processes for building charging stations and to develop standard concepts that cover common charging profiles. This will enable different energy suppliers who use these concepts to significantly reduce their planning and installation time.

This limited access to recharging stations has affected the design and operation of electric trucks. Electrification started with smaller and medium-duty trucks that are designed primarily for shorthaul applications, such as urban pickup and delivery and high-use applications like refuse trucks, transit and school buses, port drayage and even regional routes where vehicles return to a terminal every night to be recharged.

As fuel-cell technology is proved, opportunities for Class 8, long-haul operations are being made possible. However, keep in mind that government statistics show that two-thirds of freight hauled in the U.S in 2018 moved 100 miles or less.

Routes that are short, 150 miles or less, and return-to-base and predictable routes are best suited for electric trucks now. This, of course, will expand in the future.

You might be sitting there thinking, “Well how are electric trucks and these shorter hauls going to affect tires?”

The challenge for tire makers is to design tires that perform well in this new environment on vehicles that transmit torque instantly to their wheels.

E-commerce requires trucks and vans to travel shorter distances in more urban environments with more frequent starts and stops. So tires used in last-mile delivery must withstand curbing and a higher degree of scrubbing as well as provide more traction in high start-and-stop operations.

In addition, they must be able to handle the amplified stresses and strains of heavier loads.

This causes more scrubbing and tire wear on conventional tires for these applications. Current-generation light-truck tires in 16-, 17.5- and 19.5-inch rim diameters were not designed to handle these new performance criteria.

Larger size tires with 22.5- and 24.5-inch rim diameters as well as wide-base drive tires used in over-the-road applications will have to be designed to handle the stresses of higher torque optimally at the wheel end to ensure the best treadwear performance possible.

For most fleets, it’s not so much about the environment or “going green;” it’s all about economics. They are focused on their return on investment (ROI).

Electric trucks are expensive right now since no single OEM can build enough to achieve the advantages of scale, but the good news is that prices are coming down.

Since the technology is changing so quickly, the resale value of electric trucks is not known yet, nor is it clear yet whether fleets will keep electric-powered trucks longer to get a better return. Odds are they will, since maintenance costs will remain low compared with combustion-engine-powered trucks.

However, these are all considerations that fleets have to think about and only by testing electric vehicles in their operations will they be able to determine what their ROIs are.

What the industry is waiting for is the “crossover point” at which electric vehicles become cheaper to buy than their gas-powered equivalent. Every year, BloombergNEF builds a bottom-up analysis of the cost of purchasing an electric vehicle and compares it with the cost of a combustion-engine vehicle of the same size with a focus on automobiles.

Electric vehicles are the biggest change in trucking equipment since the motor vehicle replaced the horse and carriage. It seems apparent that with all the billions of dollars being invested in electric vehicles in general, and commercial trucks and vans in particular, that adoption of this technology is going to take off faster than anyone expects.

You can be sure the major OEMs will be doing some serious electric truck marketing to recoup their R&D investments, and swift advances in technology will continue to reduce the cost of electric trucks and vans.

So it won’t be long before the electric truck market moves from experimental to mainstream acceptance and then sales of electric trucks will skyrocket. And with that will come some big changes for the trucking industry.