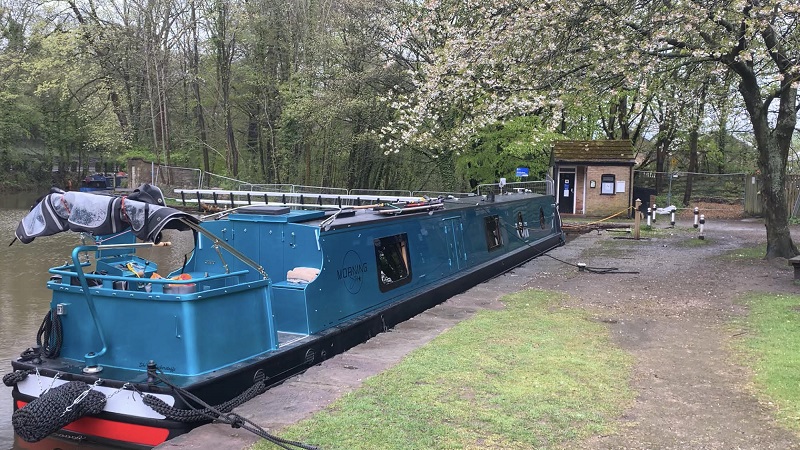 Narrowboat living has never been more popular – 15,000 people live on England and Wales’ waterways, and it seems the pandemic has only accelerated the trend of people abandoning dry land.

MM spoke to three people who call a narrowboat home.

Emily Quinn, 29, grew up on The Wirral before leaving to study in London where she stayed for the next ten years. In 2016, her father was diagnosed with Alzheimer’s and for the first six months, Emily returned to Birkenhead every weekend to help care for him.

Her father later moved to Kent to be closer to Emily, who spent all her spare time caring for him. When the pandemic hit, visits were made impossible and, as Emily explained, without regular interaction Alzheimer’s sufferers can very quickly deteriorate. In April 2020, Emily’s father died suddenly.

Keen for freedom, to further explore Britain, and a means of beating the rent trap, Emily began looking seriously at buying a boat. “It’s drilled into us that rent is dead money and that you shouldn’t rent and you should buy a house,” she said. “I felt that I was never going to be able to afford a place, especially as a single woman.”

She moved back north over the summer and began searching, but she found just as the housing market was surging, so was the market for narrowboats.

Competition was fierce on Apollo Duck, the narrowboater’s equivalent of AutoTrader, and boats were snapped up almost immediately. “They were going before you could even see them,” Emily said. Her £20,000 ‘project boat’ only became available after another buyer pulled out. She bought it on 1 October 2020 and moved in a week later.

She spent the winter in a marina splitting her time between working remotely and renovating the boat. “Doing anything takes infinitely longer on a boat, and it’s definitely more expensive,” she said. “I had to have the boat rewired, solar panels on the roof, and a new controller put in. And everything has to be marine quality.” Licence fees, insurance, and diesel costs must be factored in too — a joke among boaters is that boat stands for ‘bung on another thousand’.

Mooring fees can also be expensive, but Emily avoids them as a ‘continuous cruiser’ – someone who moves on every two weeks. There’s no hard and fast rule, but the Canal and River Trust, the body that manage England and Wales’ 2,000 miles of canals, advise travelling 20km a year, and enforcement officers are responsible for moving on particularly resolute boaters.

In London especially, more young people are drawn to narrowboats by the promise of cheap, minimalist city living. Prices range from a £20,000 second-hand boat to £150,000 for a bespoke custom-built vessel. But Emily thinks what’s most important is a desire for the lifestyle.

“It probably works out a bit cheaper than a house but it requires way more maintenance. And movement. It’s basically like a part-time job.”

Emily plans to travel down to London for September and continue to cruise the capital’s waterways. And she loves it so much she can’t imagine returning to land any time soon.

“I would definitely put myself in the bracket of being someone who could live on a boat for the rest of their life. But who knows?”

For Paul Storey-Smith, 53, the decision to sell his house and buy a narrowboat was three years in the making. Both Paul and his partner Anthony, 48, wanted a more minimalist lifestyle, and the narrowboat seed was planted by a conversation with an elderly boater while walking the dog.

Paul, a magician, and his partner Anthony mulled it over for close to a year before eventually deciding to sell their house. “When my partner texted me and said, ‘sod it, let’s do it’, and I had to phone the boat builder and order the boat, I put the phone down three times, because I thought, what are we doing?!,” he said.

They waited a year for their 57ft boat to be built, and in October 2020, Morning Star was launched from Fettler’s Wharf, Ormskirk. After a winter in a marina adjusting to life onboard, Paul and Anthony have ventured out to tour the canals of the North West. They ‘bridge hop’ (one person driving the car ahead to the next mooring spot) so Anthony can get to work at the Rochdale and Oldham Hospital.

They’ve journeyed through Manchester, mooring outside the Etihad, tackling the Rochdale Nine (a famous set of locks on the Rochdale Canal) and staying in Castlefield. “Manchester’s got a bit of a bit of a bad reputation and you hear of drugs, vandalism, and graffiti.

“But we loved Manchester, coming through Worsley into Manchester was one of the best things we’ve done on the boat,” he said. “To moor up right in the city centre, with a community of boats felt really safe. And to get up in the morning to see all the high-rise buildings, it was such a contrast from the countryside. We loved it.”

The pandemic put a stop to magic shows for Paul, instead he began selling artworks, as well as producing videos for his YouTube channel which documents life on the boat. Paul is enjoying the adventure. “We wish we’d done this five years ago,” he said. “It feels like we’re doing something different every week.”

He admits life on a narrowboat is not without its challenges and that people can have romantic ideas of what it’s like. “In a house you take for granted a constant gas, electric and heating supply. And you’ve got to be conscious of power if you’re continuously cruising,” he said.

“You have to remember to turn things off and night. And it’s mad the amount of water you consume.”

And though it’s physically demanding work, as long as they’re fit and able, Paul imagines doing it well into the future.

Sara Connaway, 34, came to the UK in 2009 from South Africa, initially to study in London before a trip to visit friends in Manchester convinced her to transfer to Manchester Met.

After university, she travelled the world working on superyachts, but kept a narrowboat in Manchester to return to on leave. For Sara, a narrowboat felt like a natural choice.

“I wanted to not have a mortgate and not be tied down to anything and move if I wanted to move.”

Three years ago, she suffered a freak accident in Hamburg. A bungee cord split on a bicycle she was riding which resulted in her losing an eye.

A week after her accident she returned to Manchester for surgery, planning to eventually return to the yachts, but she ended up staying for good.

She converted her boat, Moonshadow, into an Airbnb moored in Castlefield bowl and bought a second boat, Wandering Star, which she lived on while running the business.

Before the pandemic hit, business was booming, and Sara moved into a house share to expand her business by letting her second boat. She was forced to return to South Africa when lockdown restrictions made letting the boat impossible, but has since returned to Manchester, and business is beginning to pick up again.

Sara admits she’s not an especially well-travelled boater — she’s still to do her first lock — and has generally stayed in the Castlefield bowl, occasionally journeying up the Bridgewater Canal.

She loves the community she’s met in Manchester and the freedom life on a boat gives.

“I feel so blessed to have tapped into this lifestyle. I’ve never met more weird and wonderful people. And I don’t that we’d have met any other way unless we were in some strange little bar in town or something.

“I feel like I’ve tapped into a crazy, colourful world of people.

“There’s a crazy community spirit. We ring each other every day, we hang out on each other’s boats, we decide to travel up the canal and get away together.”

Sara has noticed more and more younger boaters. And narrowboating’s popularity has not escaped Manchester. Castlefield is almost full, as is New Islington Marina in Ancoats.

“At one point in our section of the canal I was the youngest person here, and that’s definitely not the case anymore. There’s been a good few boats of people younger than me now.”

There is sometimes a feeling on not wanting to let people into the secret. But Sara says everyone is welcoming of newcomers and always willing to help.

“Everyone loves to help a newbie out. When I was new here I was completely clueless and had to call on people for all sorts of favours.”

With expanding her business, it is challenging managing without a washing machine, and Sara has decided to leave her boat and move into a flat in Castlefield. She still wants to stay close to the marina, and dreams one day of a moving onto a widebeam.

“This apartment I’m moving onto is tiny by anyone else’s standards but for me, it’s like, what am I going to do with all that space?”