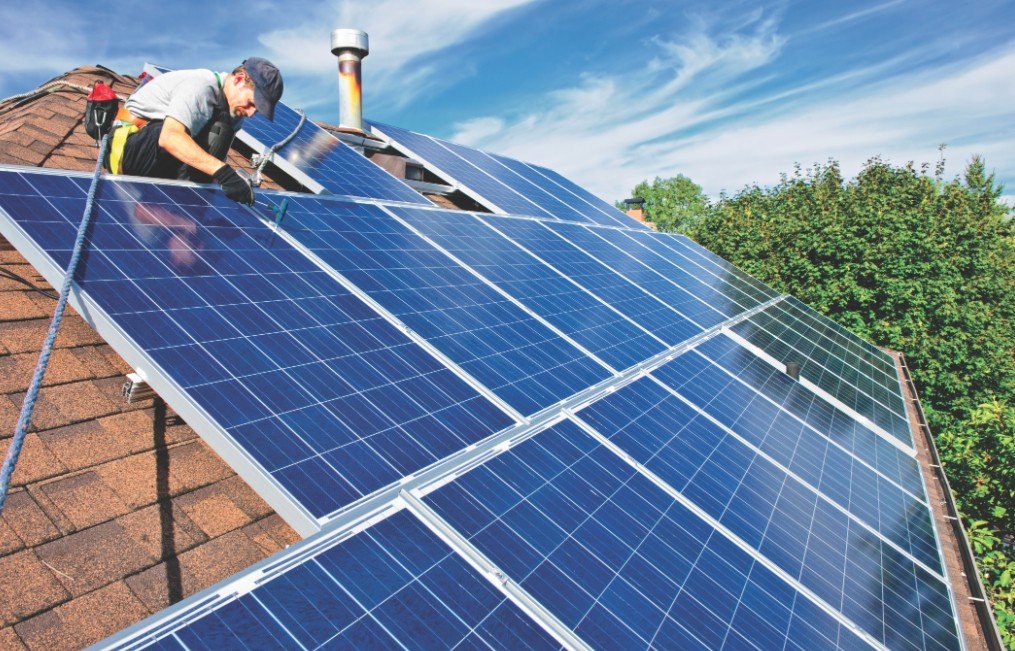 July was a good month for solar energy in Milwaukee and Wisconsin. A new City-County task force on climate and economic equity was created, and We Energies‚Äô proposed surcharge for home and business solar customers was abandoned, while more utility-scale solar energy is moving forward.

¬†Both the City‚Äôs Common Council and the Milwaukee County Board of Supervisors adopted a resolution to create the Milwaukee City-County Joint Task Force on Climate and Economic Equity. The task force will soon bring together 13 area leaders to make recommendations on how to reduce greenhouse gas emissions 45% from 2010 levels by 2030 and how to net zero gas emissions by 2050. The task force will also recommend strategies for creating more ‚Äúgreen‚ÄĚ jobs to reduce racial and income inequality.

County Supervisor Moore Omokunde, who sponsored the county resolution, says the goals of the task force are in line with many of the Green New Deal‚Äôs goals and those set forth by the Paris Accords. The resolution also links the transition to green energy to the creation of new jobs.

Omokunde says the task force will recommend ways to address climate change through transitioning to green energy and will also define how to translate the transition to green energy into jobs for the future and long-term employment.

The county resolution cites a February 2019 report from the Center on Wisconsin Strategy (COWS) that estimated 100% domestic energy production with renewable sources in Wisconsin could produce a net increase of 162,100 jobs and add almost $14 billion to the state‚Äôs GDP.

Tyler Huebner, executive director of RENEW Wisconsin, says solar energy has a huge amount of potential way beyond what it is doing now. ‚ÄúIf we already have 3,000-4,000 jobs, we can definitely do 10 times as much solar over the next decade or so,‚ÄĚ he says. But his estimate for jobs is far lower than the Center of Wisconsin Strategy report. ‚ÄúI‚Äôm not predicting we‚Äôre going to have 30,000 people working in solar, but I do think it‚Äôs a job creator. It‚Äôs a big opportunity for us economically, as well as from a clean energy and environmental perspective.

‚ÄúThis is a huge step forward for Milwaukee County and the City of Milwaukee, which has always been a leader in calling for climate action,‚ÄĚ says Elizabeth Ward, conservation programs coordinator for Sierra Club-Wisconsin. ‚ÄúThey are saying that they want 100% clean energy for the city and the community. While helping us reach our climate goals, it uses the solutions to impending climate catastrophes to solve one of Milwaukee‚Äôs greatest and longest problems in terms of the economic inequity in the city, especially with people of color.‚ÄĚ Ward sees economic benefits coming from jobs and other forms of economic investment and development and sees opportunities for improving transportation to underserved communities and channeling grants for energy efficiency into ‚Äúneighborhoods that need it the most and to people that have been historically oppressed.‚ÄĚ

Ward says the task force will now have, ‚Äúthe very difficult job of figuring out what does this truly look like, and they will have to ensure that whatever plans and programs are put into place ensures economic and racial equity.‚ÄĚ The task force will have 13 members made up of elected officials, community members and representatives from various advocacy groups including Citizen Action of Wisconsin, Sierra Club, NAACP and Milwaukee Youth Council.

Erick Shambarger, director of environmental sustainability at the City of Milwaukee, says the task force is a complement to the ongoing efforts by the City. ‚ÄúI think it is an opportunity to broaden the conversation of stakeholders to include more folks,‚ÄĚ he says, noting that climate change is becoming of greater interest to the public, which wants to see more action from political leaders. ‚ÄúEffort is at the local level because it is the city and local governments that have been taking action on climate change. Cities have been trying to fill the void that we had seen at the state and federal level. I‚Äôm glad to see the state now has new leadership in the governor‚Äôs office talking about climate change.‚ÄĚ

Down with solar surcharge, up with utility-scale solar

‚ÄúWe were able to reach an agreement with We Energies and the Public Service Commission that from our perspective will help grow solar for homeowners, businesses and local governments that want to pursue it, because We Energies has removed what would have been a surcharge on those customers,‚ÄĚ RENEW Wisconsin‚Äôs Huebner says. ‚ÄúIn addition, we‚Äôve agreed to support We Energies moving into utility scale solar to help reduce the usage of coal plants and instead utilize more solar. From our perspective, it‚Äôs a win for solar of all sizes.‚ÄĚ

The parties agree to remain in discussion over the next two years until We Energies goes before the rate commission again. However, the issue of cost recovery for solar customers is not totally settled, according to Brendan Conway, a We Energies spokesperson. ‚ÄúThe cost-shifting does not go away just because of the settlement,‚ÄĚ he says. ‚ÄúThere is a very real cost shift. People who have solar on their homes still rely on our network, yet because the way costs are billed by not paying a percentage of the energy charge, they are not paying their fair share. Those costs don‚Äôt disappear. Those costs get shifted to people who don‚Äôt have solar.‚ÄĚ

Solar advocates argue that the surcharge was merely an effort to discourage individual solar customers and potential customers.

Third-party solar installers can apply for substantial federal tax credits for installing solar, which can be passed along to their customers, whereas government entities cannot apply for the credit, making third-party financing an attractive option for municipalities. The financing arrangement also does not require a large upfront investment. Shortly after We Energies blocked the Eagle Point installation, We Energies rolled out its Solar Now program, which would allow We Energies to own solar installations and pay lease payments to the host customers.¬†The program could build up to 35 megawatts of solar.

Milwaukee decided to stick with Eagle Point for three of its projects and self-finance for three others. When We Energies came out with Solar Now, ‚ÄúWhat we said was no. We‚Äôre good with the projects we had with Eagle Point,‚ÄĚ Shambarger says. ‚ÄúWe were under contract with them. We couldn‚Äôt just walk away. It wasn‚Äôt the right thing to do, either. So, we said no. We‚Äôd like to get the Eagle Point projects done.‚ÄĚ Since that time, the City self-funded three of the projects and installed solar at three libraries: Central, Center Street and Tippecanoe. ‚ÄúThe other three projects are still getting challenged at the PSC and in court.‚ÄĚ

The city, however, is in the process of moving ahead with some Solar Now projects on city-owned brownfields, land that cannot be redeveloped because of contamination.

‚ÄúWe‚Äôll see how this all plays out with the rooftop third-party stuff, but that shouldn‚Äôt stop us with moving ahead with Solar Now on these city-owned brownfield sites that can‚Äôt otherwise be developed,‚ÄĚ Shambarger says. ‚ÄúIf Eagle Point prevails, there still couldn‚Äôt be solar on these brownfield sites. That‚Äôs why we feel comfortable moving forward there. It still has to be approved by the Common Council.‚ÄĚ

Shambarger says that he is encouraged that We Energies pulled back from its solar surcharge and that this would make it more palatable for the Common Council to approve an agreement with We Energies.

‚ÄúOur stance remains the same,‚ÄĚ he adds. ‚ÄúWe support a robust and competitive rooftop solar market, but we also support the utility taking big steps to transition its supplies to renewable energy. We need both. We want to work on both fronts. We have to do it in a way that preserves the reliability and affordability of the overall electric system.‚ÄĚ

RENEW Wisconsin‚Äôs Huebner wants to make sure that the utility doesn‚Äôt discourage small solar energy enterprises. ‚ÄúWe do want to be sure that We Energies is not the only one that is able to offer those kinds of leases and financing deals to customers.‚ÄĚ He explains that, in many other states, there are more marketplace opportunities where private enterprises can also offer the kind of deal that We Energies is offering with Solar Now. ‚ÄúRight now, We Energies is relying on a pretty old‚ÄĒI think maybe it‚Äôs 100 years old‚ÄĒsection of Wisconsin law to say that only the monopoly utility is able to offer that kind of financing,‚ÄĚ he says. Huebner would like to see a level playing field where the private market can offer the same types of financing mechanisms as Solar Now, which would encourage customers to pursue solar.

Transitioning to 100% clean energy will require the cooperation of large utilities such as WE Energies, as well as the innovation and flexibility of small private solar enterprises.

‚ÄúThere are a lot of competing and overlapping interests,‚ÄĚ Huebner says. ‚ÄúAt RENEW Wisconsin, we are focused on growing renewable and clean energy technologies in the state. There are always a lot of complexities as we do this, but, in general, we are finding a lot of success. Those kinds of interests are coming together more and more, but we‚Äôve gotten sticking points like Solar Now versus the third-party ownership. As we still are at the foundational phase of this growing industry, hopefully we can get this resolved and create some clarity that will help all different types and ownership models of solar growth.‚ÄĚ

As small solar thrives and grows, however, large utilities drag their feet in making the transition to 100% clean energy, largely for financial reasons. Large investments for coal plants can take decades to get off the books and this impedes investment in renewable energy, Huebner says. In Colorado, for example, legislation to help refinance and retire coal plants sooner rather than later has been introduced. Twenty other states have used similar strategies to help close down coal-burning plants.

‚ÄúThe concept is creating pathways for the utilities to refinance the big coal-burning power plants,‚ÄĚ Huebner says. ‚ÄúA lot of plants when they were built were expected to last 40-50 years. Even a plant that was built 40 or 50 years ago may still have a balance on the books that needs to be addressed. There are number of coal and natural gas plants that are going to need some sort of mechanism to get those more swiftly retired and get to more solar and wind power facilities.‚ÄĚ

Carbon Tracker, a London-based think tank that analyzes the impact of the transition to renewable energy on capital markets and the potential investment in high-cost, carbon-intensive fossil fuels found in a recent study that 42% of global coal capacity is already unprofitable because of high fuel costs; by 2040, that could reach 72%. Meanwhile, the price of onshore wind and solar power continues to fall.

The study found that it costs more to run 35% of coal power plants than to build new renewable generation and that, by 2030, building new renewables will be cheaper than continuing to operate 96% of today‚Äôs existing and planned coal plants. In the US, closing fossil fuel operations and replacing them with renewable energy could save $78 billion, while China could save $389 billion and the E.U. $89 billion.