The North Kingstown company contested an emergency moratorium on solar facilities approved by the Exeter Town Council in December 2018. The moratorium was created to challenge a previously approved zoning change that allowed solar projects to go forward.

The Town Council approved the amendment after two members who approved the original zoning amendment were voted out of office. The new council argued that the solar arrays were inconsistent with the town‚Äôs comprehensive plan.

In his Jan. 8 ruling, however, Lanphear said the moratorium wasn‚Äôt specific enough to warrant a reversal of the zoning amendment, enacted in 2015, that allowed the solar projects to advance.

‚ÄúTo invalidate such an amendment,‚ÄĚ Lanphear wrote, ‚Äúthe moving party must demonstrate that the amendment is contrary to the public interest or does not comply with a specific part of the comprehensive plan.‚ÄĚ

The decision cannot be appealed and means the case will head to trial.

Bill Fischer, spokesperson for Green Development, noted the trend by rural towns such as Exeter to fight utility-scale solar installations. He said despite the jobs and climate benefits of solar energy, ‚Äúlocal leaders throughout Rhode Island have decided to embrace nimbyism and lawsuits. At some point the taxpayers in these towns will realize it might be time for new leadership.‚ÄĚ

The small roof panels reduce diesel-fuel consumption and improve battery performance for the new buses, which will be manufactured by the GILLIG bus company of California for the Rhode Island Public Transit Authority (RIPTA).

The Rhode Island Commerce Corporation will pay for¬†two-thirds of the solar project‚Äôs cost with a $42,800 grant to RIPTA through the state Renewable Energy Fund. The 19-pound solar systems are expected to save RIPTA $80,000 annually. The cost reductions will be realized by eliminating idling and powering lights and other electrical needs, according to state officials. The solar systems will also extend the life of batteries and reduce road maintenance calls.

RIPTA is the first public transit system in the country to add this mobile-solar equipment, according to state officials. 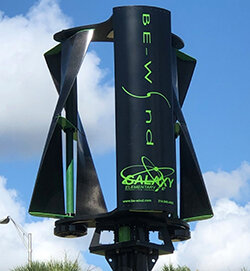 Vertical wind
The Rhode Island Progressive Democrats of America (RIPDA) is putting forth its renewable-energy vision for the state by enticing a vertical wind turbine manufacturer to set up shop in Rhode Island.

Florida-based BE-Wind LLC makes vertical turbines that range in height from 7 to 20 feet. The installer, Whiteleaf Energy Systems of¬†Falmouth, Mass., is considering opening an office in Rhode Island as part of RIPDA‚Äôs vision to create a state-based, shareable, micro-grid and energy-storage network in Cranston.

A vertical BE-Wind turbine will be on display during a RIPDA event in Providence scheduled for Feb. 10.

Wind Innovation Hub
Rather than open new offices, many 21st-century companies instead secure desk space at co-working centers and call them ‚Äúhubs.‚ÄĚ The latest is the Innovation Hub from wind developer √ėrsted. The Denmark-based company and owner of the Block Island Wind Farm has seven workstations at the CIC Providence shared office center at 225 Dyer St. ‚ÄĒ a branch of the Cambridge Innovation Center in Cambridge, Mass.

When it opens this spring, the √ėrsted hub will have members from its innovation team make brief visits from Denmark and other offices to host meetings with offshore wind entrepreneurs. Wind energy companies GEV, Boston Energy, Glosten, and Harbor Light Software have also opened branches in Rhode Island.

Trump has derided wind energy since such a facility was proposed near one of his golf courses in Scotland. He has since claimed ‚Äúwindmills cause cancer‚ÄĚ and spew harmful fumes during manufacturing.

When asked if she worries about Trump further impeding the slate of offshore wind projects, especially if he is re-elected, Raimondo said, ‚ÄúAbsolutely, I have a long list of worries if this president is re-elected, and reducing and impairing our ability to fight climate change is near the top of the list.‚ÄĚ