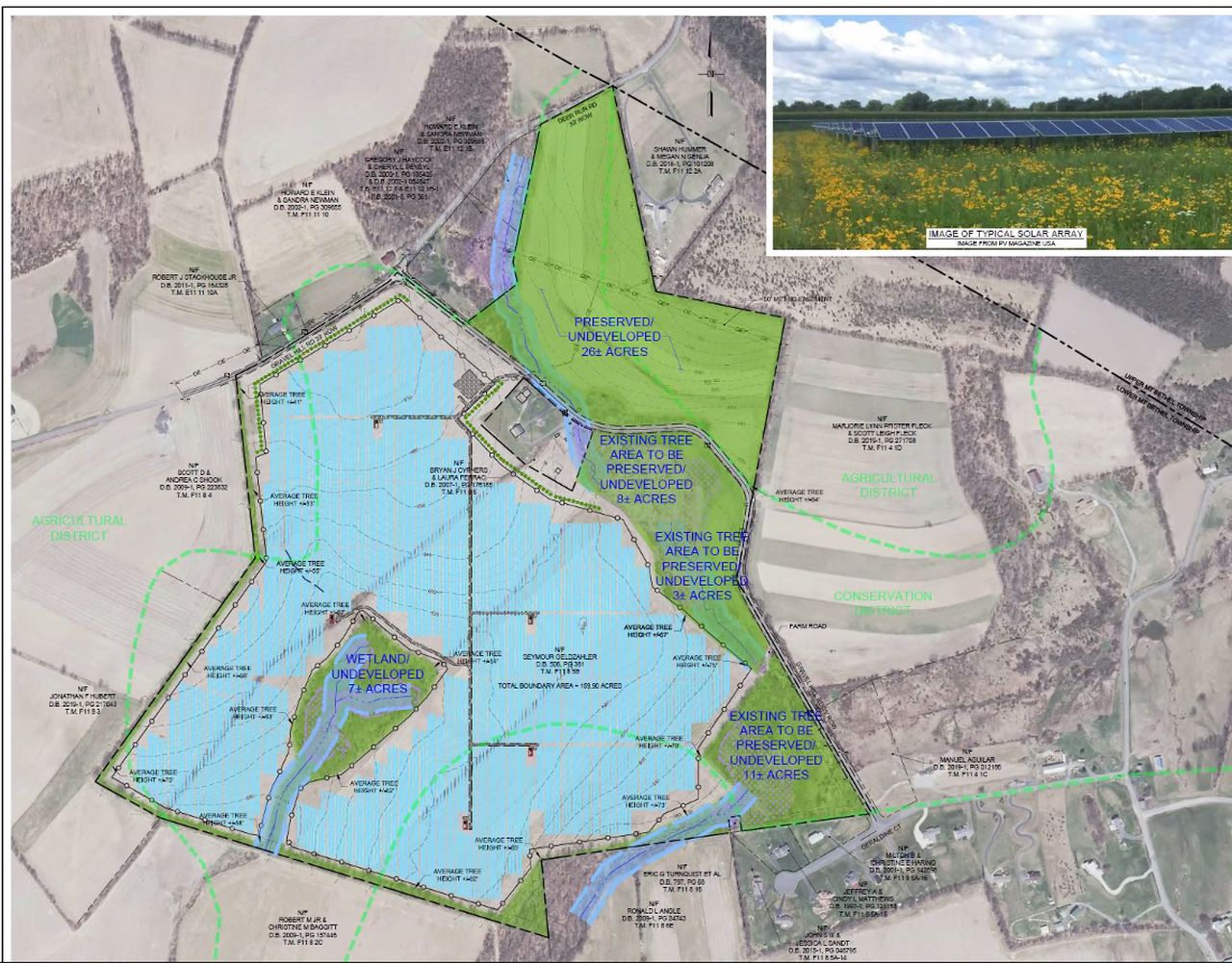 Lower Mount Bethel Townshipâ€™s Zoning Hearing Board is conducting a hearing regarding an appeal from Glidepath Ventures, over its application filed in July to build a 61,000-panel solar array project on 130 acres of a 154-acre property.

The Montgomery County-based company announced in August it changed its corporate name to Prospect14 but it is still being called Glidepath during the application appeal.

The townshipâ€™s zoning and code enforcement officer, John DeCusatis, denied the application because solar farms are not a permitted use in the conservation and agricultural zoning districts, where the Gravel Hill Road property is located.

Solar farms are not defined as a use anywhere in the township zoning ordinance, but DeCusatis said that undefined uses are permitted by conditional use approval in the industrial zoning districts.

Glidepath has argued that the industrial zoning districts in the township are so small as to make building a solar farm a logistical impracticability. It is asking the zoning hearing board to allow the project to be developed in the agricultural district.

â€śWe seek engagement with the township to discover this is a good use and should be granted a variance,â€ť Glidepath founding partner Geoffrey Underwood said during testimony before the board on Wednesday.

Originally, Glidepath had also requested the solar farm be allowed by special exception since the project resembles a public utility, which would be allowed in the district. Glidepath announced in a letter to the township this week that it withdraws that argument.

The hearing board could award the variance if it decides the ordinance would create a hardship due to the unique physical circumstances or conditions of the lot.

Township solicitor Paul North questioned Geldzahler and Underwood pressing the point that there are multiple activities, including farming and other agricultural uses, that are allowed under the ordinance that could make money for the property owner.

Allowed uses that make money do not show an undue hardship, North said.

Zoning hearing board solicitor Leo DeVito also asked a series of questions illustrating that there are many other permitted uses on the land.

Underwood argued back that the long-term lease his company has with Geldzahler would make substantially more money for the property owner than farming does.

Underwood also said the property currently brings in about $2,000 in property tax revenue yearly for the township and local school district. The solar farm would generate about $35,000 in property taxes each year over the approximately 35-year duration that the solar panels would be usable.

Underwood said the panels would be held in place by steel driven into the ground. No concrete or other lasting construction would be installed.

â€śYou can rip this entire facility out in 25 years and you havenâ€™t ruined the landscape,â€ť Underwood said.

Under Pennsylvania law, municipalities must allow for a wide variety of uses within its borders.

If the variance is not granted, Glidepath said it would challenge the constitutional validity of the townshipâ€™s zoning ordinance, which would only allow a solar farm in the relatively small industrial zone by conditional use.