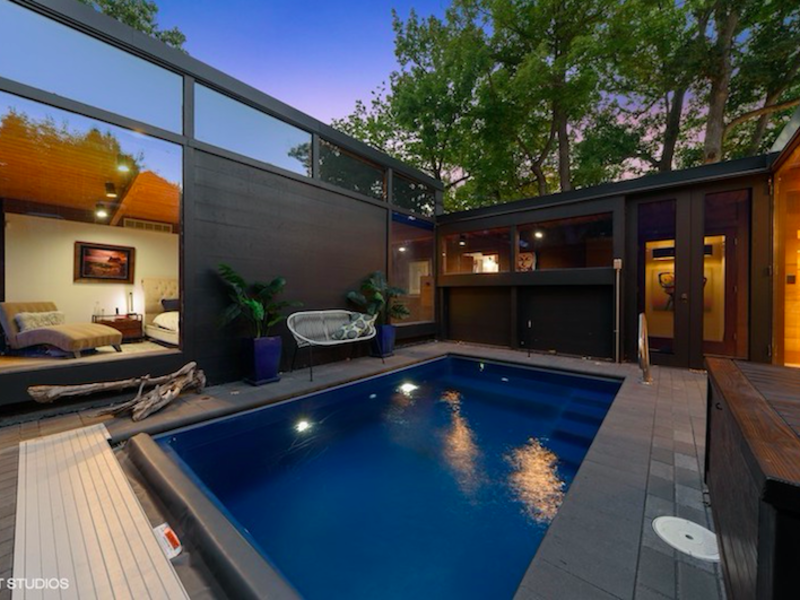 Planning a move from the city to the suburbs a few years ago, Shivani and Marvin Mendez found a house in Deerfield that had nearly everything they wanted: midcentury modern architecture, lots of openness between indoors and outdoors, and land.

What the house didn‚Äôt have was a pool. So they built one, in a courtyard in the middle of the house.

‚ÄúWe knew that would make it a bad-ass house,‚ÄĚ Marvin Mendez said.

Replacing the Japanese garden in a courtyard with a swimming pool wasn‚Äôt easy.¬† Village officials who issue permits weren‚Äôt sure what to do, Shivani Mendez said. ‚ÄúIt‚Äôs within the foundation of the house, but there‚Äôs no roof,‚ÄĚ she said. ‚ÄúThey couldn‚Äôt figure out whether indoor or outdoor codes apply.‚ÄĚ

It was worth the year-and-a-half wait. ‚ÄúIn the morning, we can hop out of bed, throw on a bathing suit and get in the pool,‚ÄĚ she said. ‚ÄúIt couldn‚Äôt be more convenient. We really have no excuse not to be working out.‚ÄĚ The pool is 10 by 15 feet, but with a tether it‚Äôs possible to swim or jog in place.

At night, Marvin Mendez said, ‚Äúwe can have 10 or 15 people sitting in the pool after dinner.‚ÄĚ That‚Äôs in normal times, when social distancing isn‚Äôt required.

They use the pool, which is heated, year-round. ‚ÄúIt was 14 degrees out the first day we sat in the pool,‚ÄĚ Shivani Mendez said.

Built in 1956 in a low-slung modernist style and later augmented with a high-ceilinged family room, the 4,650-square-foot house is on about 0.85 of an acre on Northwoods Road. The name of the original architect isn‚Äôt known for certain, but the style is strong, with mostly wood ceilings, floors and walls, and floor-to-ceiling glass in some rooms opening onto either the yard or enclosed courtyards.

‚ÄúWherever you are in this house, the outdoors is nearby,‚ÄĚ Marvin Mendez said. He‚Äôs an attorney; she‚Äôs in business investing. The couple said they‚Äôre planning to move with their child to a warmer climate.

They‚Äôll put the house on the market Sept. 10. The asking price is $1.55 million, and the listing agent is Lou Zucaro of Baird & Warner.

See more homes in our Before It Hits The Market series.

Nature is ever-present inside the house, both because of the big openings to outdoors and because of the extensive use of wood trim, found often in midcentury designs.

From the main bedroom, the long wood-lined hallway extends to a¬†far-off pane of glass at the other end of the house, like the view through a forest to a sunlit clearing. ¬†‚ÄúLiving here is an immersive nature experience,‚ÄĚ Shivani Mendez said.

This room has windows on three walls, including one unseen off the right-hand edge of the photo. Those in the center of the photo open to the swimming pool.

Typical of mid-1950s modernist designs, the house has an unassuming facade that reveals little of the architectural excitement that is inside and out back.

The exterior was ‚Äúbattleship gray,‚ÄĚ in Marvin Mendez‚Äôs words, when they bought the house. ‚ÄúWe went with black for a more sophisticated look,‚ÄĚ Shivani Mendez said.

They bought the house for $811,000 in April 2016. The couple declined to say what they spent on the extensive renovations, which included the pool, a new, enlarged kitchen and modern light and utility controls.

In the daytime, the row of Adirondack chairs looks like the primary decorative flourish in front of the house, but at night the look changes.

The breeze block screen behind the chairs is lit from behind at night, creating a lacy pattern across the front of the house. While breeze block is a midcentury standard, it‚Äôs not original to this house but a flourish that the couple added.

‚ÄúIt‚Äôs part of the nighttime light show we designed,‚ÄĚ Marvin Mendez said. Lights shine up into trees and beam out from the row of windows like lanterns. ‚ÄúIt looks to our daughter like this little magical playland,‚ÄĚ he said.

A more substantive change was replacing the old solid front doors with the nearly transparent pair seen at right in this image. They‚Äôre an introduction to and complement for the glass courtyard wall, seen at left in the image.

The openings bring in abundant daylight. ‚ÄúNo matter how wintry cold it is outside, there‚Äôs always light in here,‚ÄĚ Marvin Mendez said. ‚ÄúIt‚Äôs impossible not to feel that difference.‚ÄĚ

The original wood finishes in the main rooms of the house have seemingly never been painted over.

Milky white walls and an untrimmed fireplace opening give the living room a modernist simplicity. This is part of Shivani Mendez‚Äôs redesign of the home‚Äôs interior. The original brick mantel is concealed behind the new expanse of wall.

The old, small galley kitchen is gone, replaced by this sleek space with a long island facing a bank of windows. The linear design paired with big windows is based on the kitchen in actress Halle Berry‚Äôs¬†former lakeside home in Quebec, which the Mendezes admired in shelter magazines.

The black cabinetry was dictated by the black exterior, some of which is visible outside the kitchen‚Äôs big windows. ‚ÄúWith that wall of windows, what‚Äôs outside affects what‚Äôs you do inside,‚ÄĚ Shivani Mendez¬†said.

Windows wrap three sides of the family room addition, whose architect is also not known. The wood ceiling complements the originals, and big skylights (at right) bring in light. This room includes a sunken bar area, a clever throwback to the home‚Äôs midcentury origins.

The screened porch is off one side of the swimming pool, sort of a transitional zone. ‚ÄúIt helps us extend the season when we can be outside,‚ÄĚ Shivani Mendez said.

They redid the master bath with new slender tub and two-person shower, but the ceiling and skylight are original.

Outside is a large deck accessed from several rooms and the screened porch.

The couple‚Äôs selection of black for the wood exterior makes its strictly rectilinear profile look almost as if it was designed by Ludwig Mies van der Rohe, an icon of modern architecture whose buildings were made of steel.

At the wooded edge of the yard is a patio and fire pit where ‚Äúit feels like we‚Äôre camping,‚ÄĚ Marvin Mendez said.

Along with all the updates that the couple has made to the house is one that‚Äôs not yet installed but is included in their asking price. Solar panels will be mounted on flat roof sections within the next few weeks, they said.