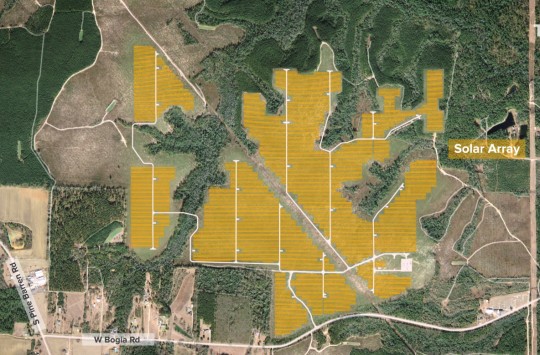 On Wednesday, Gulf Power announced the start of construction on a huge solar farm near McDavid, as plans are still in the works for a second solar facility in the same area.

NorthEscambia.com was first to report in December 2019 that facility was planned for West Bogia Road. Documents show the project to be about 640 acres, only 353.18 acres of which will be disturbed. The development is in an area north of West Bogia Road between South Pine Barren Road and Highway 29, just west of Ray’s Chapel Baptist Church. Construction is expected to be completed by the end of the year.

Gulf Power is also currently seeking the necessary permits for the First City Solar Energy Center off Holland, Cox and Roach roads in McDavid. It will be 74.5 megawatts, also enough to power another 15,000 homes annually.

The First City Solar Center will encompass about 554 acres with about 458 acres to be disturbed for approximately 300,000 solar panels.

Both projects are expected to create 200-250 jobs during peak construction.

Gulf Power has also announced that construction is beginning on the 74.5 megawatt Blue Springs Solar Energy Center in Jackson County.

“As part of FPL, we’re ushering in a more sustainable future for Northwest Florida by delivering cleaner, lower-cost energy and increasing reliability while keeping costs down for our customers,” said Mike Spoor, Gulf Power vice president. “With each solar farm that we build, we’re reducing our carbon footprint and providing cleaner air for our region, ensuring we keep Northwest Florida beautiful for generations to come, while also benefiting the local economy with the contribution of hundreds of thousands of additional tax dollars.”