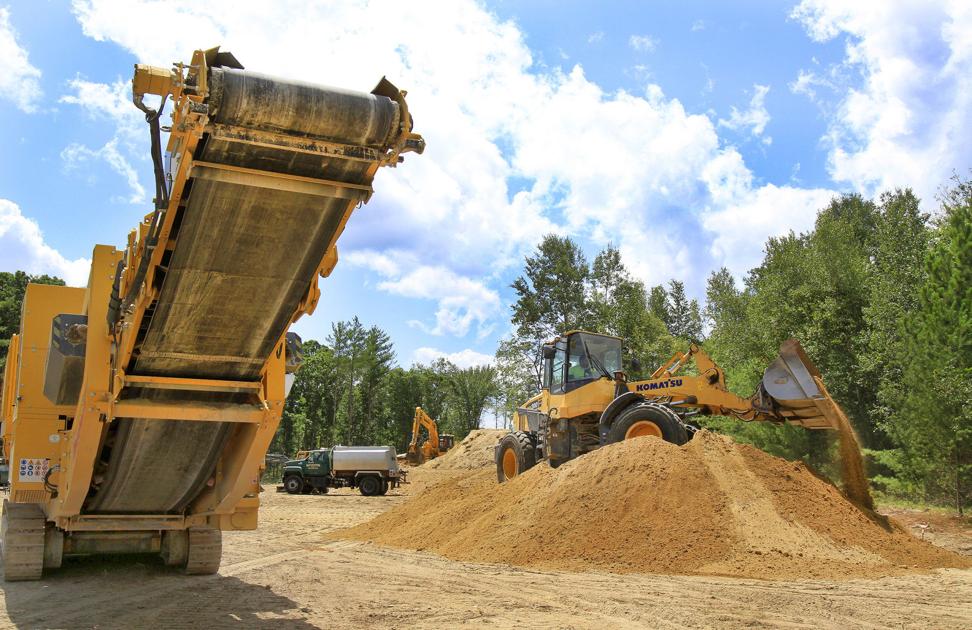 The Winchester Economic Development Corp., a nonprofit that now owns the property, began working with town officials in 2012 to turn the former gravel pit off Route 119 into an industrial complex, which it calls Stone Mountain Business Park. WEDC hopes the development will generate job opportunities as well as revenue for the town from commercial real estate taxes, according to its chairman, Mark Tigan.

“Our mission as a [nonprofit] is to alleviate the size of the residential property tax,” Tigan said. “We’d like to increase our tax base … and improve employment opportunity.”

The 63-acre industrial park will be able to support 250,000 square feet of manufacturing and office space and up to 1,000 jobs, according to Tigan.

Work on the park’s critical infrastructure began last week, six years after the town approved an initial feasibility study for the project.

Mathewson Construction in Hancock will oversee the installation of water, sewer and electrical to the industrial park, as well as the construction of an access road from Route 119, according to a WEDC news release.

He said the development organization has spoken with several prospective buyers for the property’s five available lots — which it hopes will attract businesses in food processing, metal production and wood manufacturing, among other industries — but none have been purchased yet.

“It’s hard to sell anything without a road,” Tigan said.

Most of the park’s infrastructure work will be completed this fall, with paving done in early spring, according to the news release.

Companies will be able to begin building their manufacturing facilities on site once the infrastructure construction is finished. Tigan would like WEDC to sell at least one lot at the industrial park each year, with a goal of having the park at full capacity by 2025.

A jolt from solar

Stone Mountain Business Park’s companies will also have access to electricity generated by two solar farms that will be built adjacent to the property.

New England Solar Garden plans to begin construction on the adjacent developments, one of which lies on the town’s landfill, in the spring and install solar panels within four months, according to the Portsmouth-based company’s founder and Senior Vice President of Project Development Andrew Kellar.

Between those and two additional developments in Winchester, New England Solar Garden will be able to generate up to four megawatts of electricity for companies in the business park and other nonresidential users, Kellar said. He added that customers will also receive a metering rebate from the company, effectively reducing their electricity bills.

The partnership with New England Solar Garden, which helped pay for the park’s infrastructure work, allowed WEDC to fulfill a requirement in the Economic Development Administration grant that it secure matching funds from other entities, according to Kellar.

“It’s such a collaborative effort between the town and WEDC to use solar to help this project come to life,” he said.

The Stone Mountain Business Park property, which is behind Evergreen Cemetery, was a gravel pit for more than 40 years, according to the WEDC news release. Town Administrator Karey Miner said the property was taken by the town just over a decade ago, after the previous owner failed to pay taxes.

Records from the Cheshire County Register of Deeds show the town granted the former gravel pit to WEDC, which was founded in 2010 as a spin-off of the Winchester Revitalization and Economic Development Committee, in September 2019.

In 2014, the town applied for a $12,000 grant from the U.S. Department of Housing and Urban Development to fund a feasibility study for the industrial park. The study, conducted by Holden Engineering and Surveying of Bedford, ultimately found the development would be viable.

Still, WEDC struggled to build momentum for the project, due to a delay in the state’s permitting process for land alterations, ambiguity over who owned the land it planned to use for an access road and difficulties identifying sources of funding, according to Tigan.

“We had very little luck in the commercial lending sector,” he said. “We talked to several local banks, and they didn’t have an appetite for [the development].”

The N.H. Community Loan Fund, a nonprofit lender in Concord, ultimately provided a $444,000 loan for infrastructure installation, according to the WEDC news release. The project also received support from the U.S. Department of Agriculture and Monadnock Economic Development Corp., a Keene-based organization that backs commercial building in the region.