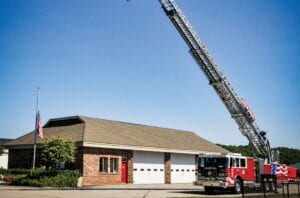 The city of Harbor Springs will dip its proverbial toe into the green energy pool with several small solar panel projects. The Harbor Springs City Council agreed to move ahead with bidding out and getting needed approvals for placing some solar panels on the Harbor Springs Area Fire Department building, the Skate Park building and the Ford Park building. The decision came at the Councilâ€™s regular meeting Monday night, Oct. 5.

According to city manager Victor Sinadinoski, last year the city reviewed a quote for potentially putting solar panels on bigger buildings â€“ City Hall, the Police Station and the DPW building. Due to the health crisis, the projects were put on hold.

â€śNow we are on track to have some sort of solar project installation for next year,â€ť Sinadinoski wrote in a memo to council.

Further investigation resulted in a determination that DPW building, located off Fairview Street, would not work. The new roof there has an extensive warranty and the city did not want to jeopardize the warranty.

â€śSecondly, the location is not highly visible to the public. We think that installing solar on the DPW building would not generate the impact we want with our first solar projects, which should be smaller in scale and more visible to the public,â€ť Sinadinoski wrote.

â€śWe then turned to the fire station on State Road. It is located on a highly traveled road, especially by residents, and has good solar potential (no large buildings or obstructions nearby). It would thus be a visible project. The fire station is owned by the Fire Authority (of which the City is a member, along with West Traverse, Little Traverse and Pleasantview) and located on City-owned land. Thus, we would ultimately need Fire Authority Board approval to proceed with installing solar panels on the building. After talking with Fire Chief and (city council member John) Cupps, he believes that this is something the Board would be open to,â€ť Sinadinoski wrote.

â€śThis particular projectâ€™s primary purpose would be to create a renewable energy project that is community-oriented and highly visible,â€ť Sinadinoski noted.

Placing solar panels on City Hall and the Police Station would require replacing 17-year old roofs at around $15,000 each. That money would have to come out of the general fund and is likely not something the city would want to undertake at this time, the city manager said.

â€śGiven the fact that our City Hall and Police Station roofs have between 5 and 10 years of life left on them, I think it makes sense to wait for those larger projects and instead consider our smaller buildings, such as Skate Park and Ford Park, which have newer roofs in good condition. Also, if the Fire Authority Board is amenable, we could put solar panels on the fire station, as well. Putting solar on these three buildings will cost the City about half as much as installing them on City Hall and the Police Station when taking into account the costs to replace the shingles and the longevity left in the roofs. Further, these buildings are lightly-used buildings meaning that much of the electricity produced will be pumped back into our grid and sold to our customers. Finally, these three buildings are in three different locations of town and would be visible to a variety of residents and visitors,â€ť Sinadinoski wrote.

â€śI think it makes sense to go with the smaller buildings for now,â€ť Mayor Matt Bugera said at Mondayâ€™s meeting. â€śThen later if a roof needs replacing we could consider it there.â€ť

Council unanimously agreed to have the city manager move forward on the smaller solar projects.

The cost for the solar panels will come out of the cityâ€™s electric fund.