Build a better battery for wind and solar storage, and the energy sector will beat a path to your door – GreenBiz 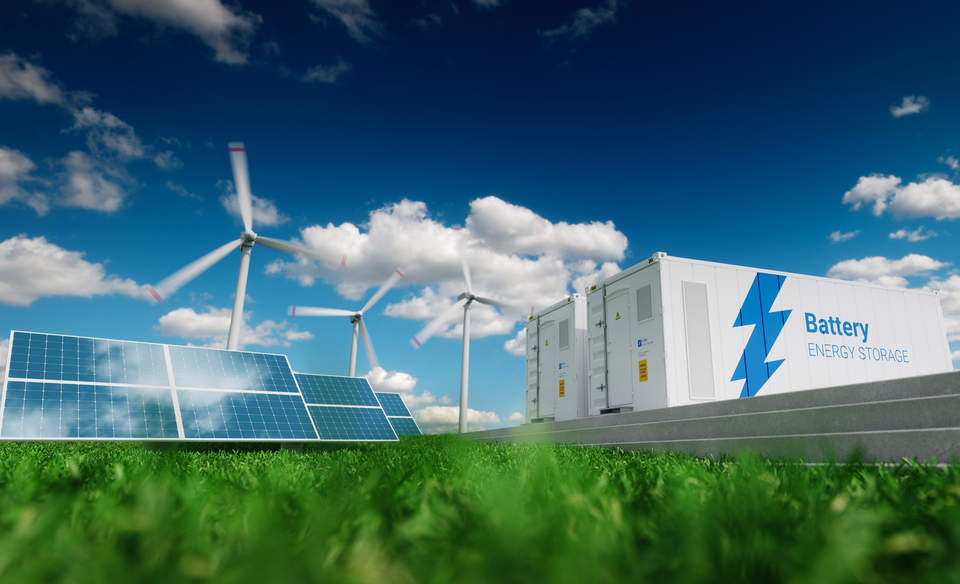 This article originally was published on Ensia.

For all their many virtues, wind and solar power have one major flaw: At some point, even in the windiest, sunniest parts of the planet, the wind stops blowing and the energy-giving rays of the sun disappear over the horizon. So as the world works to decarbonize its energy supply by reducing its reliance on coal, natural gas and petroleum and increasing its use of these variable renewable sources of electricity for the grid, one technology in particular is experiencing a renaissance: the stationary battery.

In a nutshell, stationary batteries are devices that use chemical interactions between materials to store electricity at a set location for later use. These batteries make it possible to store the electricity generated when sun and wind are at their peak so it can be made available to the grid when electricity demand is at its peak ‚ÄĒ such as when people get home from work and turn on their lights, air-conditioning or heating, television and kitchen appliances.

The class of battery most modern electronics users and electric vehicle owners are familiar with is the lithium-ion, or Li-ion, battery. Li-ion batteries also predominate in the stationary battery market, mainly because they‚Äôve been around longer and have had more time to mature as a technology, according to Jessica Trancik, associate professor of energy studies at the Massachusetts Institute of Technology (MIT) and the Institute for Data, Systems and Society.

As incentives increase for development of more large-scale electricity storage and the business case for better battery storage technology becomes evident, plenty of innovation is happening.

But just because Li-ion batteries are commonly used in consumer electronics and EVs, that doesn‚Äôt necessarily mean they‚Äôre the best option for storing electricity in a renewable energy‚Äďdependent grid. Today‚Äôs lithium-ion batteries have their risks, costs and limitations. While they might be first out of the blocks on the battery market, they soon will face stiff competition from a variety of alternatives and amendments that aim to match or beat their efficiency, with greater safety and sustainability. As incentives increase for development of more large-scale electricity storage and the business case for better battery storage technology becomes evident, plenty of innovation is happening.

Li-ion batteries consist of a graphite electrode and a lithium-based electrode ‚ÄĒ most commonly lithium-cobalt ‚ÄĒ immersed in a liquid. When the battery is in use, charged lithium atoms (ions) flow from the graphite electrode to the lithium-based electrode through the liquid, and that flow of charged particles generates electricity. When the battery is recharged the flow is reversed, sending the lithium ions back to the graphite anode where they are stored ready for discharge.

The Li-ion made its first commercial appearance in 1991 in Sony camcorders. Use since has expanded into a huge range of small and large electronic devices, electric vehicles, military and aerospace applications and for large-scale energy storage, such as the 100-megawatt lithium-ion Tesla battery built to support the energy grid of South Australia in 2017.

“In terms of the voltage it can produce, lithium is really a champion,” says Jenny Pringle, materials engineer and senior research fellow at the Institute for Frontier Materials at Deakin University in Melbourne. Lithium is very good at driving a strong flow of electrons, and therefore efficient at generating electricity, so has offered the best bang for buck of battery materials to date.

However, lithium ion batteries have their downsides as well. They contain toxic, volatile and flammable fluids that have earned them notoriety for bursting into flame or exploding. And lithium is a finite resource. Demand for this so-called “white petroleum” has skyrocketed in recent years, with one forecast predicting demand will increase from 300,000 metric tons per year in 2019 to at least 1.1 million metric tons¬† per year by 2025, and another suggesting battery production will consume 70 percent of global lithium supplies by 2025.

This raises the question of whether cheaper and more abundant elements could be used instead of lithium.

Concerns about the mineral‚Äôs availability have led to price spikes in recent years, but with the number of lithium mines set to double, no one is yet talking about running out of the stuff. However there are growing concerns about the environmental cost of lithium mining and extraction in areas such as Tibet and Bolivia, where scarce water resources are being used to harvest the mineral from vast salt flats, and there are reports of local Tibetan water sources being contaminated with toxic by-products of mining.

Not only that, but cobalt ‚ÄĒ another essential element in many Li-ion batteries ‚ÄĒ is a conflict mineral. At least half the world‚Äôs supply is mined in the Democratic Republic of Congo, where some workers ‚ÄĒ including children ‚ÄĒ face appalling and dangerous conditions.

Pringle says one option to reduce the fire risk Li-ion batteries pose is to use ionic liquids ‚ÄĒ non-flammable molten salts with low melting points ‚ÄĒ as the liquid component. A more attractive idea is to use a solid, which sidesteps the problem of volatile and flammable liquids. But the trade-off is that electrically charged atoms don‚Äôt move as freely and easily through a solid as they do through a liquid, so less electricity is generated.

Some early contenders in the solid-state stationary battery space include those made with a lithium-rich ceramic as a substitute for the liquid currently being used. But these don‚Äôt avoid the other problems with lithium, such as its finite availability and the justice issues associated with mining.

This raises the question of whether cheaper and more abundant elements could be used instead of lithium. There‚Äôs particular interest in elements such as silicon, sodium, aluminum and potassium. But the electrochemical potential of these metals is lower than lithium, so the energy density of the battery might be reduced, Pringle says.

Sodium-sulfur batteries, in which the electrodes are molten sodium and molten sulfur and the electrolyte is solid, have been a promising avenue of investigation for large-scale energy storage for the grid because they are highly efficient at producing electricity, and are long-lasting. One challenge is that these batteries need to operate at very high temperatures. But researchers at institutions including the Massachusetts Institute of Technology and the University of Wollongong in Australia are investigating the possibility of sodium-sulfur options that can operate at room temperature.

It‚Äôs definitely still early days, particularly for stationary energy storage, but it‚Äôs a really important area and I think people are starting to realize that.

Among the frontrunners for large-scale stationary storage of wind and solar power are flow batteries, which consist of two tanks of liquids that feed into electrochemical cells. The main difference between flow and conventional batteries is that flow batteries store the electricity in the liquid rather than in the electrodes. They‚Äôre far more stable than Li-ion, they have longer lifespans, and the liquids are less flammable. Not only that, but a flow battery can be scaled up by simply building bigger tanks for the liquids.

Plenty of other developments are happening in this space, making it an exciting time for battery research and development, Trancik says.

For example, researchers at RMIT University in Melbourne are developing a proton battery that works by turning water into oxygen and hydrogen, then using the hydrogen to power a fuel cell. Several other research teams around the world are exploring completely lithium-free ion batteries using materials such as graphite and potassium for the electrodes and aluminum salt liquids to carry the charged ions. Researchers in China are looking at improving the existing technology of nickel-zinc batteries, which are cost effective, safe, nontoxic and environment-friendly but don‚Äôt last as long as Li-ion. Work is even going on related to saltwater-based batteries, with one design already being used for residential solar storage.

« Column: After starving energy business to make cars, Tesla is interested in solar again – Buffalo News This Ford F-450 May Be The First Tesla-Powered Pickup Truck Ever – InsideEVs »