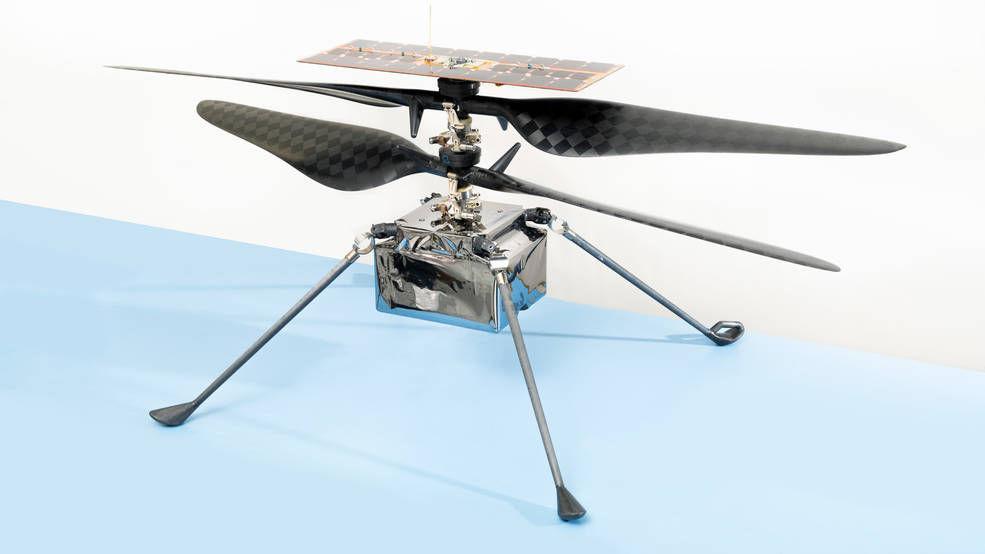 NASA‚Äôs Perseverance rover will be carrying a passenger when it launches toward Mars on or after July 22.

‚ÄúIngenuity,‚ÄĚ the first ever craft to attempt controlled flight on another world, will be strapped to the belly of Perseverance. This small solar-powered helicopter is expected to deploy two months after Perseverance lands on Mars. Ingenuity was named by a high school student from Alabama, continuing a NASA tradition of students naming Mars-bound craft.

Ingenuity faces many challenges. While Mars has only about 1/3 the gravity of Earth, its atmosphere is only 1% that of Earth, making a flight near the surface of Mars the equivalent of a flight at 20 miles altitude here on Earth. To compensate for the thin atmosphere, Ingenuity‚Äôs two sets of counter-rotating blades will spin at 2,400 rpm ‚ÄĒ nearly 10 times the rate at which helicopter blades spin on Earth.

The craft also has to be incredibly light. The helicopter‚Äôs 4-pound body houses solar cells, lithium-ion batteries, cameras and an electronics package. A heater keeps the electronics warm during Martian nights, when temperatures can drop well below -100 degrees.¬†

Ingenuity must also fly autonomously. It takes radio signals anywhere from three to 20 minutes to travel from Mars to Earth or vice versa, making real-time control of the aircraft impossible. Luckily, NASA engineers have been designing, refining and implementing independent navigational systems for rovers on the surface of Mars for almost 20 years.

After a journey of 309 million miles to reach the Martian surface, it is expected that Ingenuity will be capable of one 90-second flight per day. The helicopter is a technology demonstration mission, which aims to pave the way for future powered aircraft on Mars and elsewhere in the solar system. Its cameras will provide unique and thrilling views of the Martian surface.

Incredibly, this is not the only extraterrestrial aircraft NASA is working on. In 2026, NASA hopes to send the Dragonfly rotorcraft to explore Titan, the largest moon of Saturn.

The Weekly Roundup: The Morning Sky

Venus, now the morning star, rises in the east a little after 4 a.m. Mars is high in the pre-dawn south east and sits lower left of Neptune and upper right of Uranus. Mars is about 76 million miles away while Uranus and Neptune, both invisible to the unaided eye, are 1.9 and 2.7 billion miles from us, respectively.

The Moon is full on July 4, rising as the sun sets. Jupiter and Saturn rise around 10 p.m. The gas giants occupy an interesting part of the sky. They both appear to the left of the ‚Äúteapot‚ÄĚ asterism in the constellation Sagittarius. An asterism is a collection of stars that traces out a shape, but is not a constellation.

The center of our Milky Way galaxy is in the direction of Sagittarius, and the band of stars that is the disk of the galaxy seems to rise like steam from the spout of the teapot. Warm summer nights and the lure of Jupiter, Saturn and the many clusters and nebulae of the milky way await you. Get out there and look up.

Dan Price is a NASA/JPL Solar System Ambassador and informal educator. He leads the Night Sky Tours at Josephine Sculpture Park. Visit his Starpointe Astronomy YouTube channel to learn more about space and astronomy. Have a question about astronomy or space science? Send an email to dan@starpointestudio.com and it might be featured in a future column.

« The Invisible House is a reflective building that mirrors its desert surroundings – Inhabitat One Oberlin school torn down, another going up – Chronicle Telegram »