Beardstown pork plant powered by the sun, thanks to C-PACE financing – Jacksonville Journal-Courier 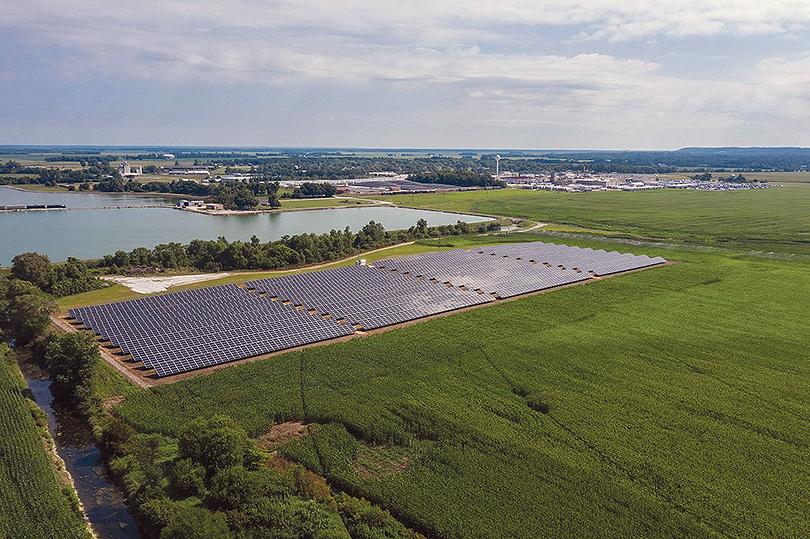 BEARDSTOWN — A massive pork processing plant is powered by solar thanks to commercial PACE financing — a first for the company, and for Illinois, and an example that advocates hope will inspire other industries to embrace the form of financing for clean energy projects.

JBS Foods USA is saving about $250,000 a year and making progress toward its goals of net-zero carbon emissions by 2040 thanks to the 2.6-megawatt solar array, which consists of 7,200 panels on a lush field near the plant that kills 20,000 hogs a year and is the economic lifeblood of the town of Beardstown.

This article first appeared on Energy News Network and is republished here with permission under a Creative Commons license.

Jim Mullin, the company’s director of energy procurement, said that the financing tool was the linchpin to getting the solar array, which was completed in May 2020.

Beardstown is one of about a dozen counties or municipalities in Illinois, including Chicago, that have commercial PACE financing programs in place. The JBS solar array is the largest renewable energy project sparked by C-PACE in the state.

In recent years, JBS considered various ways to install solar on the Beardstown plant, Mullin said. Under a more typical power purchase agreement where a solar developer would own the installation, JBS would not have been able to fully leverage savings, including the benefit of federal and state solar incentives.

The company could have sought private commercial financing, but banks are often reluctant to lend on favorable terms for large clean energy projects, and companies typically want to prioritize capital investments that generate revenue rather than savings, Mullin said.

PACE, which stands for property assessed clean energy, allows the debt payments for clean energy and other sustainability-related projects to be rolled into property tax bills. That means the company can pay off the debt over a longer period of time — 15 years in JBS’s case — in a better deal than they could otherwise have gotten.

Illinois is among the 38 states that have legislation on the books enabling PACE financing for commercial projects, but the mechanism is still used relatively little in Illinois and many other states, in part because of consumers’ and public officials’ lack of familiarity with the option.

In order for the project to proceed, JBS and Counterpointe Sustainable Real Estate, the PACE-focused investment firm financing and managing the arrangement, had to convince the local Beardstown City Council to participate.

Under PACE, local taxing bodies (counties or municipalities) are responsible for transferring payments baked into property taxes to the lender — in this case, Counterpointe, which essentially made the $4.5 million loan to JBS for the array.

Counterpointe managing partner Eric Alini said that thanks to the C-PACE financing, the loan is at an interest rate and on an amortization schedule that works out much better for JBS than any loan a commercial bank would have offered.

“With the tax bill that comes twice a year, there will be a separate line item that says ‘PACE payment,’” Alini said. The solar array meanwhile is “generating savings, and the savings then are in the hands of JBS, and they can use the savings to pay the tax bill.”

Counterpointe also manages PACE programs in other states and in Chicago, where a $22 million hotel rehab has been the biggest C-PACE project thus far. Mullin and Counterpointe staff hope the Beardstown project will inspire similar undertakings across Illinois and beyond.

Mullin said the solar array will generate about 4,000 megawatt-hours per year, a significant contribution to the plant’s approximately 85,000 MWh annual load. The pork processing facility is extremely electricity-intensive in part because of the extensive need for refrigeration.

JBS has two other C-PACE projects underway: a biogas generator at its plant in Michigan and another on-site generation project in Florida. Both states are leaders in C-PACE projects, Counterpointe staff said, adding that Minnesota, Wisconsin, Missouri and Ohio also have vibrant C-PACE programs. Mullin wishes that Iowa would pass PACE-enabling legislation so that JBS could use it for solar or other investments on their facilities there.

“The Midwest has been an early adopter of C-PACE, and Iowa would be a great addition,” said Grant Nelson, principal of Integro Strategic Finance, which brokered the deal between Counterpointe and JBS.

“We got our feet wet. Now that we really know what we’re doing, we can take the 10,000-foot view,” Mullin said. “This is really performing well, so where can we replicate it?”