Increased use of batteries can ensure grid stability and boost the contribution of renewables in Indiaâ€™s energy mix, which is necessary to decarbonise the power sector and bring down emissions 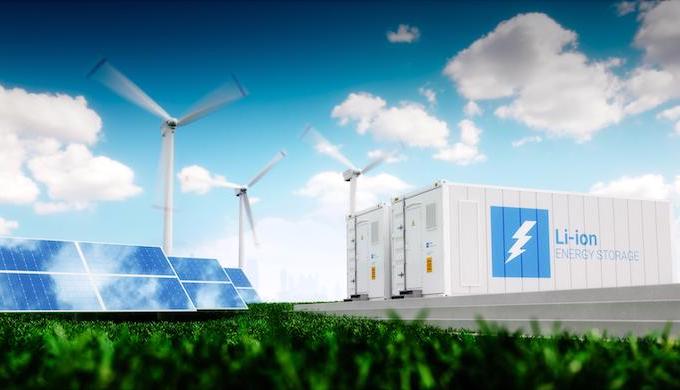 Daily reports of power supply at Power System Operation Corporation Limited (POSOCO), a national agency that handles load despatch functions, show that the percentage of renewables in the energy mix generally vary between 6 percent and 10 percent over one month. This indicates that the potential of VRE installed capacity is not fully utilised.

With no facility to store electricity as of now, the electricity produced in the power plants and fed into the grid should ideally be the same as the electricity consumed. If the electricity demand is more than the supply, the frequency at which the grid equilibrium is maintained (50 Hertz) will come down and vice versa. An imbalance in frequency when it goes beyond permissible limits leads to grid collapse and blackout (power outage).

Since solar radiation and wind speed keep varying, the frequency cannot be maintained at 50 Hz. Electricity demand also keeps varying. Hence grid operators cannot match supply and demand, if only power from VRE sources is fed into the grid. Since these technical limitations hamper more absorption of renewable energy, a mix of thermal and hydro power are used for maintaining the balance, since power output from these plants can be controlled.

India has a target of 175 GW of renewables by 2022. As the country transitions more towards renewable energy sources, it is becoming imperative to ensure grid stability. One of the solutions for a balanced grid is energy storage batteries. When the energy generation is more than the demand, it can be stored in the batteries and used when generation comes down and/or demand increases.

Batteries have been in use for long, but not on a scale that could support the grid. The worldâ€™s first and largest grid-scale battery called Hornsdale Power Reserve (HPR) came up in South Australia in 2017, after the state had a blackout in September 2016. The 100 MW capacity power reserve, runs on lithium-ion battery.

According to Rashi Gupta, founder director of Vision Mechatronics, operating in robotics, renewables and batteries segment, lithium ion, lead acid, redox flow, molten salt (sodium sulphur) are the battery storage technologies that are available today. However, the 2019 Nobel winning Lithium ion (Li-ion) technology dominates the market. â€śLi-ion would be ideal for hourly or daily applications like peak shaving (managing demand to eliminate demand spikes) and grid stability as they have high efficiency and power handling capacity, besides decreasing prices. Further, maintenance required in lithium batteries is very less and they have small footprint due to their high energy density,â€ť Gupta told Mongabay-India.

It has been extensively used for peak load management, deviation settlement mechanism management, etc. and provides enhanced power supply, by addressing various technical issues. The battery occupies 625 sq.m, covering the BESS, isolation transformer and fire fighting installation. The spokesperson says that there is scope for reduction in space with container-based solutions.

As per a December 2019 BloombergNEF report, battery price which was more than $1,100 per kilowatt-hour (kWh) in 2010, came down to $156/kWh in 2019. â€śThe price is expected to reach $100/kWh by 2025; and with the new battery manufacturing facility being proposed in India, we feel BESS would scale up in the near future, to manage the power grid as well as the electric vehicle infrastructure,â€ť says the Tata Power-DDL spokesperson.

Speaking from an investorâ€™s perspective, Ajay Devaraj, secretary general of Indian Wind Power Association (IWPA), says that there are various hurdles at the moment in realising return on investment. Once battery costs come down, he expects renewable energy generators (REGs) to be eager to add battery storage to their portfolio, though he finds funding options limited.

According to Paul Gleeson, managing director, Energy, Resources and Water at Aurecon, an engineering, design and advisory company that played a key role in the HPR project, the installed unit cost of a grid-scale battery with two hours of storage (e.g. 100 MW power rating, 200 MWh energy storage capacity) is approximately $340 / kWh.

Considering the high costs, Ajay Devaraj offers an innovative solution. â€śShift from a CapEx model to an OpEx model, that is, sell a service instead of a product. In such a model, the REGs pay a usage fee for storage, something akin to the usage fee paid for driving through a toll road,â€ť he says. He adds that modalities such as who determines the usage fee structure, on what basis, who would be the service provider, etc. have to be worked out.

Meanwhile, reports indicate that Tesla, the HPR battery manufacturer, has recovered costs and that it reduced electricity costs by $116m.

â€śThough co-located with the Hornsdale Wind Farm, HPR operates independently of the wind farm,â€ť says Gleeson. â€śTherefore HPR has not had a direct impact on the wind farmâ€™s utilisation, however this benefit can arise for renewable projects facing curtailment due to network constraints.â€ť

Aureconâ€™s assessment indicates that HPR has performed well in enabling system security, reducing the risk of blackouts, and the batteryâ€™s flexibility enabling faster dispatch of power in case of frequency disturbance.

As per an International Energy Agency (IEA) report, power sector contributes more than 50% to energy-related carbon dioxide emissions in India. The Energy & Resources Institute has projected that Indiaâ€™s electricity demand would be 2040â€“2857 TWh by 2030. This would mean increasing the countryâ€™s power production. Unless renewable penetration is increased in the grid, emissions would increase, proportion to production.

According to Breakthrough batteries, a report by Rocky Mountain Institute, storage will enable renewables penetration of 16 to 20% by 2025. Central Electricity Regulatory Commission, in a paper on introducing electricity storage in India, said that storage would improve the operating capabilities of the grid, lower power purchase cost, cater to peak demand and address the variability and intermittency of renewables.

Considering these aspects, batteries can ensure energy security and grid stability while increasing the percentage of renewables. With a maximum life of 30 years, batteries would help decarbonise the power sector and bring down emissions and hence public health issues caused by air pollution.

Jency Samuel is a journalist based in Chennai.

This was first published in Mongabay India.