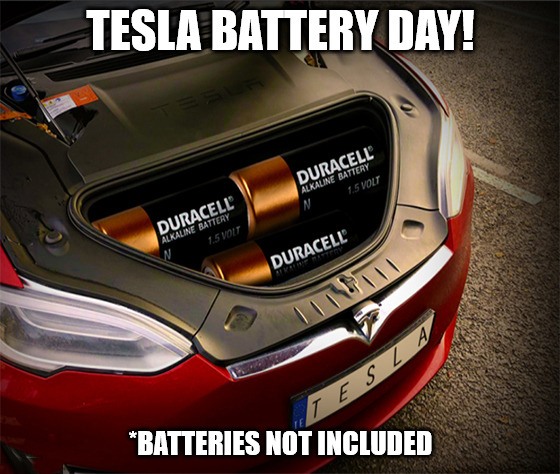 Yes, the much talked about Tesla Inc. (Nasdaq: TSLA) Battery Day is upon us. That big event that prompted analysts far and wide to upgrade TSLA stock and lift their price targets.

In the past week, Deutsche Bank hiked its TSLA price target by 33% to $400, and Piper Sandler boosted TSLA from $480 to $515. Both cited in-house battery production and lower battery costs as drivers for their bullish stances.

If everything went as planned, these two ratings firms would look like geniuses.

Teslaâ€™s anticipated new battery touts a 70% increase in energy density and improved power density. In short, Tesla is poised to make better batteries in-house than it can buy from outside suppliers like Panasonic.

But this is Tesla. Not everything goes according to plan. Anyone remember â€śAutonomy Investor Day?â€ť

On April 19, 2019, CEO Elon Musk promised that Tesla drivers would â€śnot need to touch the wheelâ€ť by the second quarter of 2020. He even promised a fleet of â€śrobotaxisâ€ť that would take full advantage of Teslaâ€™s autopilot feature.

And here we are in the third quarter of 2020, and the streets are just chock-full of robotaxisâ€¦

And, for icing on the cake for analysts at Deutsche Bank and Piper Sandler banking on Tesla cutting costs by making batteries in house, Musk tweeted:

We intend to increase, not reduce battery cell purchases from Panasonic, LG & CATL (possibly other partners too). However, even with our cell suppliers going at maximum speed, we still foresee significant shortages in 2022 & beyond unless we also take action ourselves.

Oh, and one more thing â€¦ In case you were wondering â€śWhy 2022?â€ť for serious volume production, Musk had a tweet for that too:

The extreme difficulty of scaling production of new technology is not well understood. Itâ€™s 1000% to 10,000% harder than making a few prototypes. The machine that makes the machine is vastly harder than the machine itself.

It appears that while Tesla has a working prototype, it still has no idea how to mass-produce its new batteries, hence the 2022 target.

Can you say â€śOof?â€ť At least Musk wonâ€™t push the batteries downhill to prove they work, right? (Iâ€™m looking at you, Trevor Milton.)

So, even before it began, Battery Day was a letdown for TSLA investors. All that hype â€¦ gone in just a few tweets.

I hope you didnâ€™t YOLO TSLA call options ahead of todayâ€™s event. If so, youâ€™re hurting pretty bad right now.

The bottom line is that Tesla is a solid company with great ideas and an impressive lineup of electric vehicles, batteries and alternative energy solutions. (Solar anyone?) However, thereâ€™s a metric crap ton of hype surrounding TSLA shares right now.

If you hold TSLA, continue to hold but prepare for volatility. If not? Donâ€™t let a battery day bust be your end-all be-all bet on electric vehicles.

Why? Because we know a better way in on the great battery race, with one powerhouse of energy whipping up a fury. Click here for more! 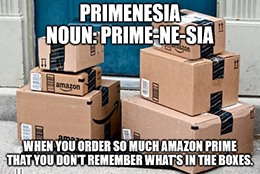 Peloton Interactive Inc. (Nasdaq: PTON) could be back in â€śimmaculate homeâ€ť and â€ślarge picture windowâ€ť territory after todayâ€™s surprise announcement.

Amazon.com Inc. (Nasdaq: AMZN) just took the wraps off its Echelon Smart Connect Fitness Bikes, and at $499 a pop, they spell trouble for Peloton.

Basically, itâ€™s everything that Peloton offers. The Echelon membership is also â€śper user,â€ť meaning that you can take your workouts to other machines and all future Echelon machines.

Meanwhile, Pelotonâ€™s bikes start at $1,895 each and require a $64 per month per bike subscription fee. Thereâ€™s no taking that Peloton subscription to a different bike or rowing machine.

Now, we can argue quality of hardware and quality of exercise programs till weâ€™re blue in the face. But what we canâ€™t argue is price and portability. Amazonâ€™s Echelon has that hands down. And if Amazon can do it, other competitors are surely waiting in the wings.

PTON fell more than 5% on the news before bouncing back. AMZN rose more than 3% as it continues its march toward total retail domination.

Better: In the Zone 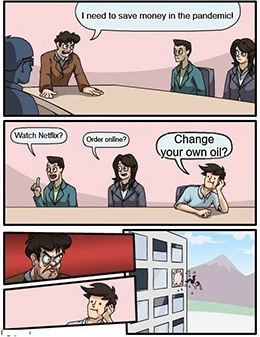 One of the most overlooked sections of the market during the pandemic is DIY. Thatâ€™s â€śdo it yourselfâ€ť for those not hip to street lingo.

And weâ€™re not talking â€ślowered expectationsâ€ť earnings and revenue either. Earnings: $30.93 per share versus $25.46 expected. Revenue: $4.55 billion versus $4.18 billion expected.

Furthermore, earnings rose 37% year over year, while revenue was up 14% by the same measure.

There are two factors for AutoZoneâ€™s success, and they will remain in place until the pandemic finally loosens its hold on Main Street.

The first is travel restrictions and lockdowns. AutoZone offers the parts and fluids you need to maintain your vehicle at home, even when you canâ€™t travel to have someone else do it for you or your local QuickyLube is closed for â€śreasons.â€ť

The second is money. Itâ€™s much cheaper to DIY auto care if you or one of your friends knows how. Or if you have access to YouTube. Seriously. It costs more than $110 at the quick lube places to change the oil in my car, compared to about half that if I do it myself. (Stupid pricey synthetic oilâ€¦)

With millions out of work due to the pandemic, expect â€śmoneyâ€ť and convenience to keep driving AZO earnings and revenue well into next year. 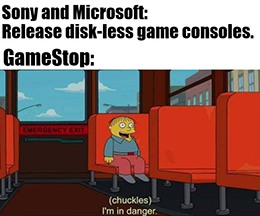 Watch out, Amazon! GameStop Corp. (NSYE: GME) is gunning for you.

The same genius who brought you Chewy Inc. (NYSE: CHWY) has plans to transform struggling GameStop into an Amazon competitor. (Iâ€™ll file this sentence under â€śThings I never thought Iâ€™d ever say.â€ť)

Entrepreneur Ryan Cohen, Chewy founder, has acquired about a 10% stake in GameStop, making him the largest individual investor in the company. Cohen announced today that he has held talks with GameStop management and board members â€śto produce the best results for all shareholders.â€ť

According to the infamous people familiar with the matter, Cohenâ€™s plan is to have GameStop compete with e-commerce giants like Amazon. The idea revolves around selling more than just video games, consoles, toys and T-shirts and shipping them quickly to consumers.

If you want to know what will really happen, look at Chewy. The pet supply e-commerce platform was bought out by PetSmart after the latter realized Chewy had a better platform for online sales.

The same will likely happen to GameStop if Cohen gets his way.

Physical video game media is almost dead â€” and GameStopâ€™s business model with it. Iâ€™m waiting on pins and needles to see just where Cohen is going with this, but I can almost guarantee you itâ€™s a buyout by another company and not e-commerce competition with Amazon.

Today, weâ€™ve got a Quote of the Week from everyoneâ€™s favorite talking head â€” not David Byrne, but watch out, you might get what youâ€™re after.

No, weâ€™re getting down with Jim Cramer today, who isnâ€™t down with this weekâ€™s sell-off action. Hereâ€™s his latest:

Weâ€™re down on something that nobody really understands. Iâ€™m kind of tempted to take the other side of the tradeâ€¦ Iâ€™m looking for opportunity just because everything is so ugly. Isnâ€™t that when you look for opportunity?

Sure, thereâ€™s plenty of volatility in the market, and thatâ€™s ugly in its own way. But both the S&P 500 and the Nasdaq are still in positive territory for 2020, with the Dow sitting on a small loss. Itâ€™s like the pandemic didnâ€™t put millions out of work and briefly shut down the economy.

In what way is that â€śugly?â€ť

Ugly would be the markets still trading near their March lows, with the potential for more losses as Wall Street realizes that corporate profits arenâ€™t anywhere near the levels they were pre pandemic â€” and wonâ€™t be for some time. Thatâ€™d be ugly and a bit more realistic.

Or at least it should be. My best guess here is that weâ€™re looking at Panama Papers 2.0 in which no one will be punished, and everyone will forget about it in a month or two.

Oh yeah, and speaking of banking flashbacks, what was Cramer up to back in, say, October 2007? Giving Great Stuff a future bonus quote:

You should be buying things and accept that they are overvalued, but accept that theyâ€™re going to keep going higher. I know that sounds irresponsible, but thatâ€™s how you make the money. Right now, up is down, left is right, peace is war.

Tremendous timing. Both the S&P 500 and Dow peaked around October 8 or 9 back in 2007, just a few weeks earlier than Cramerâ€™s Halloween prediction. And now Cramer is saying we should buy into the market just weeks after a sharp decline from all-time highs? Spooky.

Now, we could (and often do) make a living out of picking on Cramer quotes â€” hey, it was good enough for Jon Stewart. And we havenâ€™t even touched on Jimâ€™s Bear Stearns catastrophe. If we get more flip-flopping fun to lob at Jim and company, maybe â€śCramer Cornerâ€ť could be in the works. But I digressâ€¦

My point here is that you shouldnâ€™t take everything you hear from the financial mediaâ€™s talking heads as gospel unless perspective whiplash is your trading strategy.

And contrarianism for the sake of being contrarian is as good as a YOLO call option bet on Tesla ahead of Battery Day.

Battery Day has nothing on my favorite day of the week â€” Reader Feedback day!

Just 48 hours separate us from the time when we put down our market-searching periscopes to instead dive into the deep waters of our inbox. (It gets heady in there sometimes, trust me.)

But, hereâ€™s the thing: Unless youâ€™re Tommy D. writing to your favorite pen pal, (hey there, buddy!) your email is just nowhere to be found.

Letâ€™s fix that, cool? Drop us a line at GreatStuffToday@BanyanHill.com with the questions your mind inquires and the rants that your heart desires. Thanks in advance, and weâ€™ll catch you tomorrow!

Until next time, stay Great!