Interest from Australians in purchasing an electricity bill-busting solar power system showed no signs of slowing in May â€“ and prospective buyers were again thinking big.

In May, close to 82% of Australians using our service who had a system size in mind wanted a 6kW solar system or larger. The proportion has been increasing fairly steadily this year and the gap between interest in 6kW capacity and those wanting an even bigger system is continuing to close up. Interest in signing on the dotted line for a system immediately dropped from 23% in April to a little under 22% in May. Once again, 98% who requested quotes were considering buying any time from immediately to within 3 months. Also dropping slightly was the proportion of potential solar buyers wanting a â€śtop qualityâ€ť (most expensive) solar power system at just over 12% (13% in April), while 78% were wanting a system offering a balance between quality and cost, and 9% a good quality budget system. There was quite a jump in interest in advanced solar monitoring, from 67% in April (65% in March, February and January), to close to 70% in May.

Interest in microinverters eased to just over 14%. (April:15%, March:16%, February:18%). As mentioned last month, perhaps thereâ€™s some price sensitivity as microinverters will add to the cost of a system.

It will be interesting to see what happens once Enphase releases the IQ8 here in Australia. You can learn more about microinverters here, but one of the benefits not mentioned on that page weâ€™ll see with the IQ8 is â€śstand-aloneâ€ť functionality, enabling a home without a battery to continue making use of solar energy in a blackout. A currently available string inverter with this feature is the Delta E5. While just about all solar power system are â€śbattery readyâ€ť; some are more ready than others â€“ so we ask a question about this on our quote request form to help potential installers with system design aspects. Close to 11% indicated interest in a battery ready solar power system in May â€“ down on Aprilâ€™s 12%. Weâ€™re still not seeing any real indication of a home battery revolution here in Australia among new solar system buyers. Only a whisker over 7% expressed interest in a concurrent battery installation in May (8% in April and 6% for some months prior). 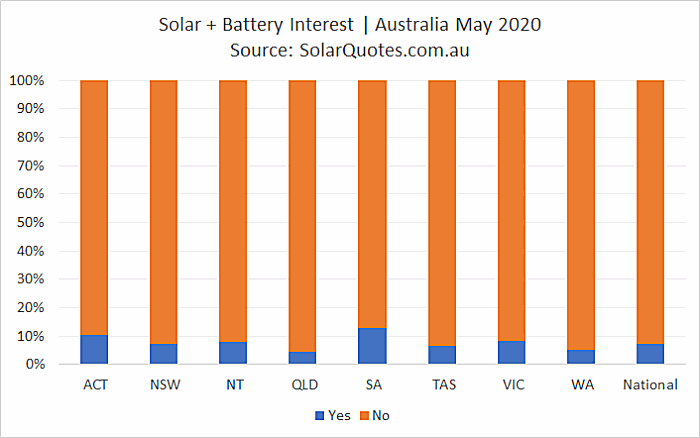 Our newish solar and battery calculator continues to see significant use, which is very handy for households considering energy storage. Not only does it provide full system payback details, it also shows how savings are affected by a battery and solar panels separately â€“ and Australians will be discovering solar-only provides the best bang for buck.

A few years back, there were some very optimistic predictions made for home solar battery uptake in Australia that havenâ€™t even come close to eventuating. As for what went wrong, SQâ€™s Ronald tackles the topic in-depth in this recent article; but basically itâ€™s all about the bucks.

Thereâ€™s a trend towards 5-10kWh increasingly considered the sweet spot by potential buyers. As to whether thatâ€™s what they end up with is a different story and there are still many considering batteries wanting advice on sizing â€“ 55% in May, up from ~51% in April. Thousands of Australians use our service every month to request solar quotes, who we match to up to three carefully pre-vetted solar providers. Itâ€™s the responses to the questions we ask during the process that form the basis of the auSSII report.

More than 472,000 Australians have used our services since 2009; providing quality installers with quality leads. Learn more about our sales leads service.

Reproducing all or part of any auSSII report is permitted, but attribution to SolarQuotes and the page from which the content was sourced is required.