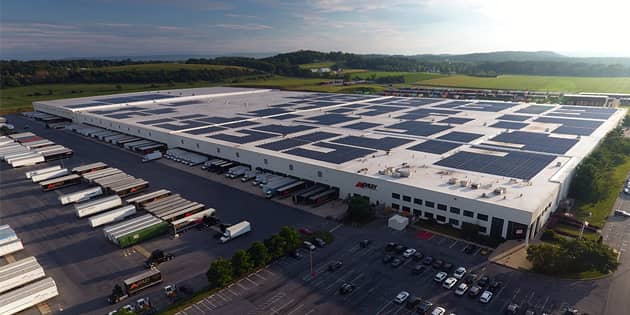 Early last year, Ashley Furniture Industries, Inc. (Ashley) committed to a multi-phase effort to reduce the companyâ€™s energy footprint. Soon, the 28,776 roof-mounted solar panels on Ashleyâ€™s Leesport, Pennsylvania advanced manufacturing and distribution facility will produce more than 9,630,600 kWh of electricity per year. This is roughly equivalent to the amount of power consumed by 786 average American households in a year.

Few rooftop solar systems of this magnitude exist in the United States. According to solar PV installation records tracked by SEIA, the national trade association for the U.S. solar industry, the project is the largest rooftop solar energy system in the state of Pennsylvania and ranks amongst the largest commercial rooftop solar installations in the nation. The facilityâ€™s current annual electrical energy consumption exceeds 10 million kWh (kilowatt hours). Solar is expected to offset 90% of the facilityâ€™s electrical energy needs.

â€śThe solar panel project we have at Ashley is just one more example of Ashleyâ€™s sustainability efforts for our global marketplace and local communities,â€ť said Todd Wanek, President and CEO, of Ashley Furniture Industries, Inc. â€śBesides reducing our companyâ€™s energy footprint, weâ€™re also able to save on energy costs which, in turn, can be passed along to our customers.â€ť

â€śThe project is noteworthy for its scale,â€ť noted Tim Paap, Professional Engineer and Director of Project Execution for SunPeak. “It can be difficult to comprehend just how large the system is when you talk about megawatts of power. The entire system takes up 580,000 square feet, or over 10 football fields, and produces as much power as two locomotives. And it’s on the roof of a facility that would otherwise be unutilized.”

â€śWe need a lot of energy to manufacture our products and it only makes sense to use renewable sources,â€ť said Ron Wanek, Founder and Chairman, Ashley Furniture Industries, Inc. â€śThis is a long-term investment, not only for Ashley, but for our environment. We are taking proactive steps and hope to see others in our industry join us.â€ťÂ

About Ashley Furniture Industries, Inc.: Ashley feels that every person deserves more value for their money. Established in 1945, Ashley is the largest manufacturer of home furnishings in the world, and was named one of Americaâ€™s Best Employers by Forbes in 2017. From design through fulfillment, Ashley is committed to delivering the worldâ€™s best home furnishing values, selection and service, and earning the loyalty and trust of its customers every day. For more information, visit www.ashleyfurnitureindustriesinc.comÂ andÂ Facebook.

About SunPeak: SunPeak is a leading, full-service solar photovoltaic developer specializing in commercial and industrial applications. Based in Madison, Wisconsin, the company works across the nation helping businesses, health care facilities, municipalities and educational institutions reduce their electrical costs and enhance their sustainability efforts using solar energy. SunPeak uses a value-added, comprehensive approach with its customers, partnering with them from the earliest stages to educate, assess, design, construct and ultimately maintain a solar installation through the expected thirty-year life of the system. By using only top-quality components and talent and managing every aspect of the process, SunPeak builds an unparalleled level of trust amongst its customers. For more information, please visitÂ www.sunpeakpower.com.

Furniture Industry News and in depth magazine articles for the furniture retail, furniture manufacturers, and furniture distributors.
Read other articles by Nic Ledoux