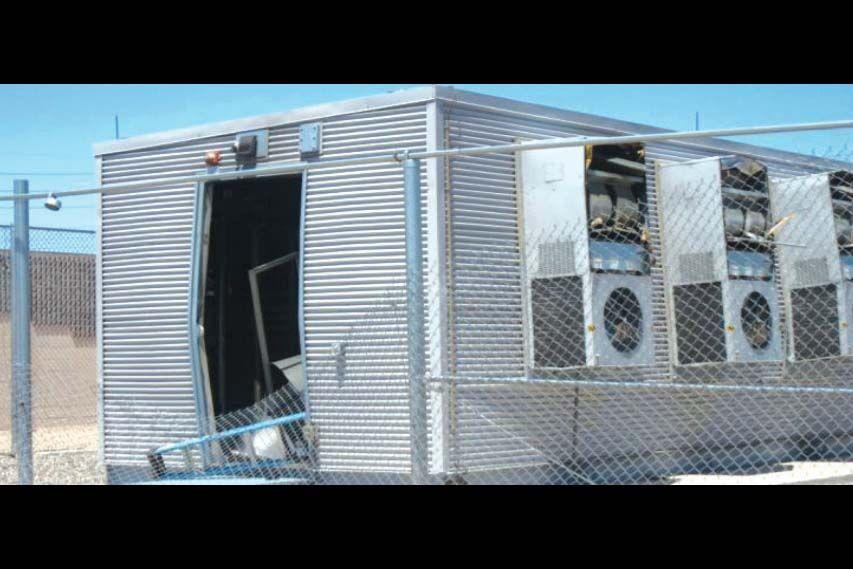 Â Â The near-deaths of four Peoria firefighters may lead to dramatic changes in the way fires involving solar power systems are handled.

â€śItâ€™s a miracle all of them are alive,â€ť said Bryan Jeffries, president of the 7,000-member Professional Firefighters of Arizona and a captain with the Mesa Fire Department. Last week, three days after APS released a technical report on the probable cause of a lithium-ion battery storage explosion that seriously injured four Peoria firefighters, the UL Firefighter Safety Research Institute (FSRI) released a report detailing the firefightersâ€™ response.

In chilling detail, it describes the moments before and after the explosionâ€”which â€śballistically propelledâ€ť one firefighter 70 feet into a chain-link fence and hurled another firefighter 30 feet.

They saw smoke and smelled acrid fumes coming from the shipping container-sized lithium-ion battery cell facility, where batteries were being charged with solar power. The APS report released July 28 said a â€ścascading thermal runawayâ€ť started a battery chain reaction that filled the facility with flammable gas.

The firefighters who responded to the BESS facility were not prepared for what faced them, according to both reports released last week.

After analyzing the situation as best they could for nearly two hours, the Peoria team decided to enter the facility.

At 8:02 p.m., the Peoria firefighters opened a door and began diagnosing the interior.

According to the FSRI report, Lopez â€śsuffered a traumatic brain injury, a collapsed lung, broken ribs, a broken leg, a separated shoulder, laceration of the liver, thermal and chemical burns, a missing tooth and facial lacerations.â€ť

â€śWhat they experienced in nanoseconds before the explosion, they will never forget. One of the guys told me it was like the loudest freight train you can ever imagine driving right over you.â€ť

The union president acknowledged the response from the firefightersâ€™ employers.

â€ś(Peoria) Fire Chief Bobby Ruiz and the city of Peoria have been intensely helpful and supportive. … and are working together to take care of these firefighters and their families. This is a life-changing event,â€ť Jeffries said.

The city and Peoria Fire Department declined to comment on the conditions of the injured firefighters.

â€śTheyâ€™re doing better,â€ť Jeffries said. â€śObviously these were some devastating injuries. Theyâ€™re all working through their rehabilitation.

The Surprise APS facility event was a powerful, painful lesson.

â€śThe bottom line for us is sustainable energy is growing and itâ€™s here to stay. The reality is we are going to be dealing with (fires at) these energy storage places that use high-capacity batteries. This is all new and emerging technology,â€ť Jeffries said.Â

â€śThe greatest lesson is these high-capacity batteries have such amazing thermal capacityâ€”our traditional firefighting measures will not work. Weâ€™ll have to take a different approachâ€”a far more careful and prudent approach.

â€śItâ€™s not like rushing into a fireâ€”an offensive approach. This is going to have to be a far more defensive approach,â€ť the union president said.

â€śItâ€™s a whole new animal. Weâ€™re going to find these all over the place, (from) small versions in peopleâ€™s garages storing solar power to massive ones.â€ť

According to the APS report, a battery cell â€śexperienced a sudden drop in voltageâ€ť at 4:54 p.m., quickly followed by a â€śthermal runawayâ€ť that generated gas and smoke.

The melting battery cells â€ścreated a flammable atmosphere within the BESS,â€ť according to the report.

When the BESS fire suppression system was activated, APS was automatically notified and in turn contacted a contractor, which sent an engineer to investigate.

The engineer saw smoke and called 911 at 5:40 p.m.â€”nearly an hour after the fire suppression system was automatically activated.

According to the FSRI report, which refers to the powerful explosion as a â€śdeflagration event,â€ť a Surprise Fire Department team arrived at the scene around 6 p.m. After assessing the situation, they called for a hazardous waste and materials unit to assist, but the Surprise hazmat team was on another call.

Operating on a mutual assistance agreement, the Peoria hazmat team arrived at the Surprise APS battery facility around 6:28 p.m. The firefighters â€śobserved a diffuse cloud of a white/gray gas/vapor. … (Clare) described the smell in the vicinity of the ESS as nasty and acrid.â€ť

The Peoria hazmat team circled the facility, measuring gas levels and making visual observations of smoke for more than an hour.

After carbon monoxide (CO) and hydrogen cyanide (HCN) levels were measured â€śat a safe level,â€ť Clare, after consulting with an APS employee and a contractor, made the decision to open the door.

As he measured the interior temperature with a thermal imaging camera, â€śA visible white gas/vapor mixture immediately poured out of the open door while the hazmat team measured gas concentrations and continued to monitor the BESS.

â€śAt the moment of the deflagration event, the firefighters outside the hot zone described hearing a loud noise and seeing a jet of flame that extended at least 75 feet outward and an estimated 20 feet vertically from the southeast-facing door.

â€śIn the event, (Clare) and (Lopez) were ballistically propelled against and under the chain-link fence that surrounded the BESS. (Clare) came to rest approximately 73 feet from the opened door beneath a bush that had ignited in the event. (Lopez) came to rest approximately 30 ft from the opened door. … The entire hazmat team lost consciousness in the deflagration event. The event also dislodged or removed the SCBA (self-contained breathing apparatus) face pieces and helmets from all of the HAZMAT team members.â€ť

The FSRI report concludes the hazmat team did not have the resources needed for an energy storage system (ESS) event.

The report analyzes the response and gives â€śrecommendations on how to improve codes, standards, and emergency response training to better protect first responders, maintenance personnel and nearby communities.â€ť

According to the FSRI report, Clare â€śhad been trained as a hazmat technician, had attended all available training pertaining to ESS and had experience with a fire involving lithium-ion batteries at an EV repair facility.

â€śThis training and these experiences likely made (Clare) one of the most prepared individuals in the Phoenix Metropolitan Area to manage this lithium-ion battery ESS incident. … The (hazmat) team conducted research and maintained communication with employees of the companies that owned, designed and maintained the ESS throughout the time they were at the scene to get the best understanding of the potential hazards.â€ť

But the hazmat teamâ€™s experience and understanding was insufficient for what they faced, according to the FSRI report:

â€śAt that point in the incident, the HAZMAT team reached the extent of knowledge and advice available from training courses and were required to formulate a plan to return the BESS to a safe condition. It was concluded that to quickly and effectively change the conditions inside the ESS, the door to the ESS should be opened. All fire department personnel agreed this was a reasonable plan.â€ť

According to the report, the Peoria hazmat team members were current with education and training, but â€ścore hazmat training curricula for these competencies do not yet cover basic ESS hazards. Extra-curricular ESS-specific training opportunities do not yet comprehensively address ESS hazards.â€ť

The facilityâ€™s system was also flawed, according to the report: â€śThe fire and smoke detection systems did not include, and were not required to include, sensors that provided information about the presence of flammable gases.â€ť

And the emergency response plan provided to the firefighters, â€śalthough compliant with the applicable codes and standards at the time of the incident, did not provide adequate guidance for mitigating thermal runaway, fire, and explosion hazards generated by the ESS.â€ť