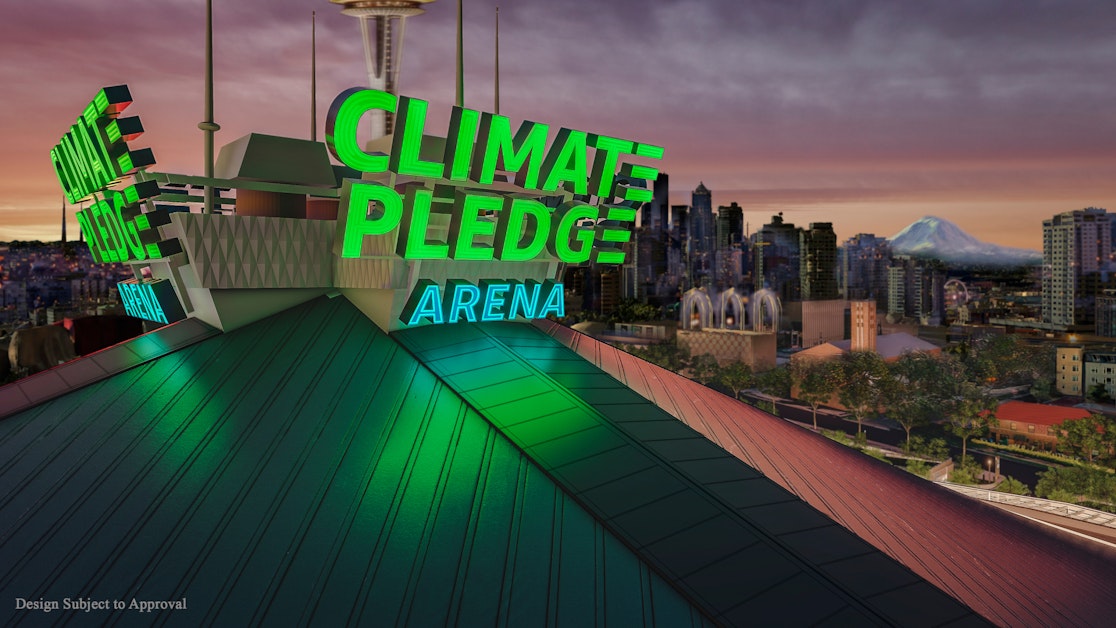 Amazon has purchased the naming rights to Seattleâ€™s new hockey and basketball arena, but in a departure from what cash-flush donors and businesses usually do, itâ€™s not naming the building after itself.

In September, Amazon issued its climate pledge, calling on companies to achieve â€śnet zeroâ€ť emissions of climate-wrecking carbon dioxide by 2040, a full decade faster than nations of the world agreed to in the 2015 Paris Climate Agreement.

â€śWeâ€™re calling it Climate Pledge Arena as a regular reminder of the importance of fighting climate change,â€ť Amazon founder and CEO Jeff Bezos said in a press release.

The new arena is to be powered entirely with renewable energy, including on-site solar panels. Ice will be made from water captured from the arenaâ€™s roof, which was salvaged from the original KeyArena that this building is replacing.

Almost all of the venueâ€™s carbon footprint will come from people driving or flying to attend or perform there, according to planning documents submitted to the city of Seattle in 2018.

According to the press release, NHL Seattle and WNBA Storm tickets will double as free transit passes to promote public transportation.

The arena’s operators plan to pay groups like the Nature Conservancy to plant trees to suck enough carbon out of the sky to offset its emissions.

â€śNet zeroâ€ť means that companies can choose whether to reduce their own pollution or pay others to do so in an effort to help the world avoid catastrophic climate change.

For most of its 25-year existence, Amazon has sought to avoid drawing attention to its carbon emissions. Last year, it revealed how much damage it does to the climate for the first time, years after its competitors had done so.

Earlier this week, Amazon announced that its carbon emissions rose 15% last year as its globe-spanning business continued to grow.

The company said that its first year-to-year comparison â€śshows progressâ€ť since its pollution grew more slowly than Amazonâ€™s 22% increase in sales.

Amazon also announced it was creating a $2 billion fund to invest in companies developing technologies to decarbonize the global economy.

Bezos, the richest person in history, had announced a similar $10 billion fund of his own earlier in the year.