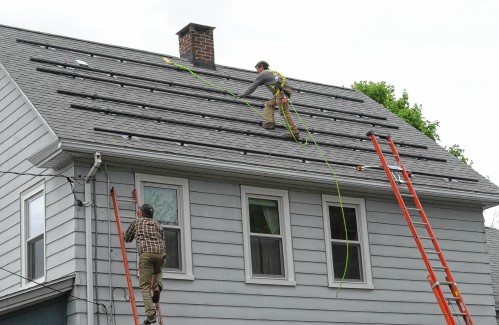 GREENFIELD — A series of talks on affordable housing concluded Wednesday with a discussion on energy efficiency.

The series, called “Housing is a Human Right,” was organized by the environmental advocacy group Greening Greenfield and the political group Franklin County Continuing the Political Revolution (FCCPR). Previous talks, starting in early April, have focused on the challenges that people face in finding housing, manufactured houses and the finances of affordable housing development.

In considering energy efficiency, the insulation of a house is one of the key issues. Improving the insulation can often be a greater source of savings than only installing solar panels, Craig said.

“Solar energy is great, but you want to start with the building first,” Craig said.

Carbone noted that, in the recent development projects by Homeowners Rehab, improving buildings’ insulation has been an important way of economizing old housing stock.

He suggested installing a geothermal heat pump, which he said he could do on his half-acre parcel of land, and would likely work on a parcel as small as a quarter acre.

“It’s really nice not to have a smelly oil tank in my basement,” Shorkey said.

Geothermal heat pumps are not yet widely adopted, so it can be difficult to find a company who will dig the necessary wells and install the machinery, Shorkey said. However, he mentioned a company called Dandelion Energy that offers geothermal heat pumps, which he said expects to start working in the Western Massachusetts area by the end of 2021.

Solar energy tends to involve an easier installation because it has been around for longer, and so there are many companies that are familiar with the technology and with the options for financing it, Shorkey said.

Craig recommended buying solar panels, rather than leasing them, if the homeowner expects to remain in their house for at least 10 more years. There are financing programs available in which the panels can be paid off within seven or eight years, and then the homeowner will have free electricity for a period of 15 years, she said.

Also, the solar panels don’t necessarily devalue a home, she said, particularly if they are installed tastefully.

“The most nice-looking ones I think are in a rectangle or a square, instead of haphazard all over the roof,” Craig said. “If it’s done tastefully, and your real estate agent is educated, it does translate into sale price.”

To watch the nine “Housing is a Human Right” discussions, visit housingishumanright.com/p/15/Workshops.