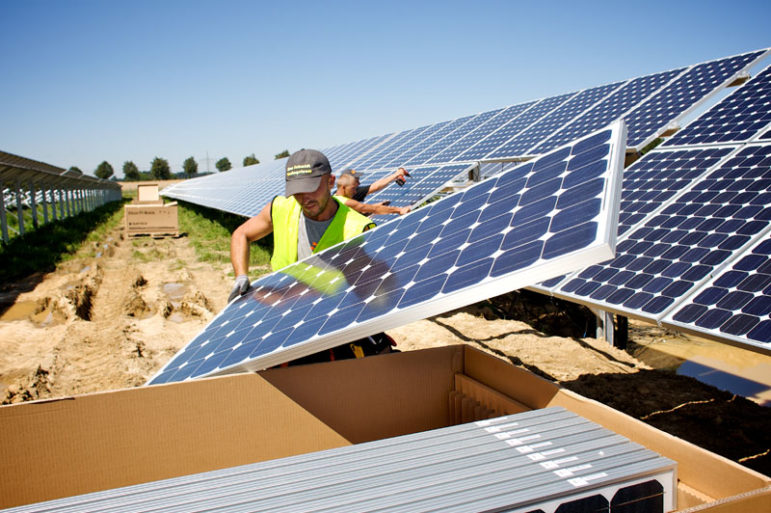 There’s been some fearmongering from organized labor groups and other misinformed proponents of Connecticut Senate Bill (SB) 999 that if adopted will reverse the downward trend in clean energy costs to Connecticut ratepayers and taxpayers.

SB 999 passed in the Senate last week. House members should know the facts. Here they are:

Large utility scale projects are those 100 megawatts (MW) and larger. The state’s largest project in East Windsor will exceed 120MW. Medium size projects range from 25MW – 100MW. Large and medium-sized jobs are “utility scale” projects. By comparison, everything else is considered small. A 2MW solar project would fit on a handful of home building lots in some Connecticut towns and provide power to a few hundred homes.

Solar industry jobs represent more than 75-percent of Connecticut’s clean energy workforce.  So SB 999 would impact the solar industry the most. Backers of the bill say over and over their bill will create more jobs. Anyone with a basic understanding of Connecticut solar policy couldn’t (shouldn’t) possibly say this with a straight face.

How do you create new jobs in the commercial solar industry when the state’s three major commercial solar programs are either idle (sold out almost two years ago), or capped at levels so low the programs sell out each year.

Not happy about the job shortage in the local solar industry? Stagnant state energy policies are the chief culprit. If you think Connecticut is a solar leader in America, think again. Among U.S. states, Connecticut ranks No. 18 in solar jobs per capita according to clean energy media outlet Cleantechnia.com. No. 18 might sound OK, except only 20 or so states are really serious about solar.

Proven solar policies that put many thousands to work in clean energy jobs in other states have not been adopted here. Or if they are, they’re capped at insidiously low levels. Massachusetts has just twice the population of Connecticut but well over four times the number of solar jobs. And lower electric rates too.

House members, this year’s installed commercial solar totals won’t be any higher than last years. Or next year’s total. Or the year after that. The programs are capped so they don’t get bigger than they are now. And so, SB 999 has zero chance at creating a single new job. All it might do is take a job away from an existing solar worker and pay the new, less experienced one more money to do the same thing.

There’s more. One labor group testified to the Labor Committee that, “ … it is clear that this (renewable energy job growth) trend will continue, and it will drive a continuing demand for skilled workers.” Trend? What trend? Several years ago, Connecticut invested a lot of money training workers at community colleges and elsewhere for solar jobs that didn’t exist. It was a colossal waste of money. Why should productive solar developers who’ve worked hard to drive the installed price of solar down so more people can afford it, now be forced to train new workers for jobs that don’t exist and then pass that cost to consumers? But yet this is SB 999.

After 10-years of solar development in Connecticut, solar installations here are now routine, cookie-cutter projects. Labor officials, and now some state lawmakers, overhyped the need for skilled workers on solar job sites as justification to pass SB 999 “AN ACT CONCERNING A JUST TRANSITION TO CLIMATE-PROTECTIVE ENERGY PRODUCTION AND COMMUNITY INVESTMENT. More like a transition from competitive construction work to bloated unnecessary spending that will ruin solar in Connecticut.

Some people might just be waking up to the clean energy transition that started a decade ago. And see an opportunity and want in … no matter how much damage they cause.

This might be a shock to some, but there are no skilled workers on commercial solar job sites outside of electricians. And even that electrical work is mostly routine (snap-clicking wires together).

That some lawmakers have linked into this debate the qualifications and ethics of some businesses developing solar here is unconscionable. The ridiculous and unsubstantiated comment in Senate debate that certain contractors are housing workers four in a room is not only ludicrous but shows a remarkable lack of respect that it was associated with a debate about Connecticut businesses who started building the commercial solar industry 10-years ago and have held it together ever since.

Private solar businesses have employed state workers here since 2011. They took on all the risk. Local businesses trained 1,000+ workers and pay them very well plus benefits. Workers here are put through OSHA and other job safety training as required by state law. There’s been no significant safety issues on any solar job site.

Putting more organized labor workers to work could have happened this session. But labor didn’t bother reaching out to the solar industry before SB 999 was raised for a debate in the Labor Committee and later approved on a strict party line vote (all Democrats voting yes, Republicans voting no). Those in the Senate who drafted the amendment that became SB 999 never bothered to contact the state’s solar industry business leaders either before adopting the bill there, again on a party line vote. Since when exactly are state laws that negatively impact a particular industry made without at least a phone call to businesses working in that field? And we wonder why businesses leave Connecticut. No respect.

Over a year ago, SolarConn petitioned the Public Utilities Regulatory Authority to create a new electric rate that will allow small businesses, schools and municipalities to take greater control of their electric bill using a large surplus of contracts that require utility companies to buy solar power. Last week, PURA announced a draft decision supporting our motion. Final approval will certainly create jobs.

We also convinced PURA to bring the electric utilities to the table with clean energy developers to figure out ways to reduce projects costs.

We’re doing our share to create jobs. Others are working against us.

With little time left in the state legislative session, we ask lawmakers to take three easy steps to create solar jobs for all workers for both union and non-union shops. None of these steps will impact the state budget.

These simple steps will double or even triple the amount of commercial and residential solar jobs in Connecticut.

CTViewpoints welcomes rebuttal or opposing views to this and all its commentaries. Read our guidelines and submit your commentary here.