A Moonshot in the Sun – ETF Trends

Residential solar installations saw aÂ recordÂ first quarter. That was before the coronavirus pumped the brakes on the renewable energy business in Q2, with one company evenÂ giving it awayÂ for free.

But new solar installations are still on track to riseÂ 33% for 2020. The Bureau of Labor Statistics even predicted solar panel installation would be theÂ fastest-growing job marketÂ over the next eight years

Tesla (TSLA)Â is getting in on that action by â€śintroducing theÂ lowest-ever cost to go solar.â€ť But Elon Musk isnâ€™t the only entrepreneur who sees a moonshot in the sun.

Rather, we think it could be a tiny device made by California-basedÂ Enphase Energy (ENPH)Â that makes solar panels plug-and-play.

Solar panels produce direct current (DC) power, and all the things we power in our homes require alternating current (AC). So, you needÂ anotherÂ device to convert DC from the panels into the AC you need to power your home.

This deviceâ€”called an inverterâ€”could change the game for solar energy.

It Could Save Christmasâ€¦

Traditional inverters require solar panels to be connected in series. The entire solar array then connects to a single inverter.

Sounds simple â€¦ until one panel malfunctions. Then itâ€™s like a string of lightsâ€”if one bulb burns out, the whole tree goes out. Only in this case, the whole system stops working and your entire house goes dark.

Enphase Energyâ€™s microinverters attach to an individual solar panel. So if one panel stops working, you maintain power from your functioning panels while you solve the problem.

Today, most solar users must make a choice about the grid.

An integrated system offers the best of both worlds. It lets you tap the grid for power when you need or want to. But if thereâ€™s a power outage, your panels cannot operate.

This is a safety feature that protects a downed and damaged grid from receiving electricity from solar-powered homes. One that leaves the owner with only the power in a battery, which typically holds just a couple daysâ€™ worth of electricity.

Enphase is preparing to roll out its newest technology called Ensemble that solves this dilemma. Ensemble enables the microinverters to isolate themselves from the grid and maintain solar production during a power failure.

Combined with batteries, this backup system could power a house indefinitely.

Enphase calls this a grid-agnostic system. We think it will make believers out of many who are on the fence about switching to solar power.

The Next Step for Solar Technology

We see Enphase as being integral to the next phase of the solar revolution. The ensemble will hit the market sometime this year, and pre-sales have already started.

This is the type of catalyst that could significantly boost Enphaseâ€™s salesâ€¦ and its stock price. 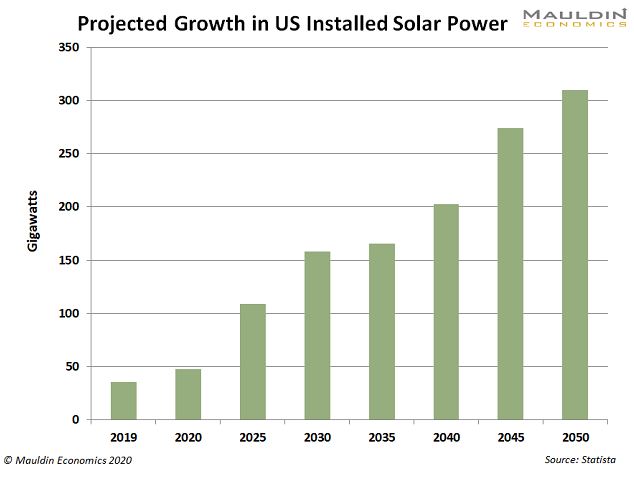 The stock now trades above the $50 mark, and with a P/E of 32. We believe that the coming growth in solar can drive ENPH to $70 over the next couple of years, even if we assume a more average P/E of 20.

With solar costs set to drop by another third by 2022, that could give an even bigger boost to this potential 40% gain.

It makes sense to adopt solar as a lower-cost, greener form of energyâ€”especially when we will be spending a lot more time at home for the foreseeable future. And companies like Enphase that make it easier to install and use solar solutions will shine bright indeed for many years to come.