More than 1,000 solar panels have been installed at the new ┬Ż35m EG Group headquarters in Blackburn, making it one of the most environmentally-friendly buildings in the country.

The four-storey building with views over Fishmoor Reservoir in Haslingden Road took three years to complete and takes up 130,000 square feet of space. The new offices can accommodate up to 700 staff, and it is believed to be the largest commercial building project of its kind in the region.

Huddersfield-based U Energy Solar said the building has been designed with ŌĆśenergy savings and carbon offsettingŌĆÖ at its core. 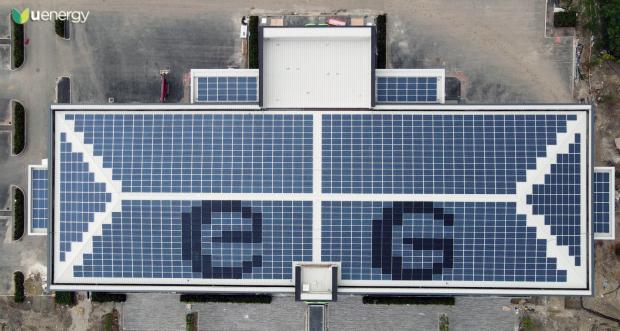 The lights are ultra-efficient LED with in-built movement sensors paired with auto-dimming features, and there is also a rainwater harvesting system for the outdoor green areas.

U Energy director Farhan Gohir said: ŌĆ£The team at U Energy delivered the huge 400kW roof-mounted Solar PV system as a turn-key EPC contract. The system is the first Subsidy Free Solar system on any of Euro GaragesŌĆÖ estates, meaning the system relies on no external funding and will pay for itself within a relatively short period.┬Ā

ŌĆ£The system from conception to realisation took eight months. Over 1,200 solar panels with 8km of cabling were installedŌĆØ

ŌĆ£Carbon savings are estimated to be around 60 tons a year. The system has been calculated to produce 320,000kWh of green electricity per annum. Excess electricity produced, especially in the summer months, will be automatically fed back into the Blackburn grid to be used by other local sites.ŌĆØ